AWARD WINNER 2020-21: Zahid wins an Award for his work as Managing Chaplain and Imam at HMP Wormwood Scrubs, and the support he offers to both prisoners and staff in times of crisis. He is praised for “his sensitivity and wisdom”, “exemplary leadership”, and “tremendous dedication”, earning respect from prisoners and staff alike.
[This Award is supported by Ingeus.] 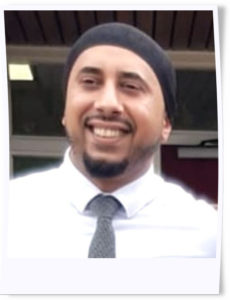 A recent report by Her Majesty’s Inspectorate of Prisons (HMIP, 2020) described the chaplaincy at Wormwood Scrubs as ‘exceptional’. They found a team which took a notably united and energetic approach to ministry, with worship and classes for all faiths. The Inspectorate was impressed by a ‘remarkably high number’ of 120 volunteers and cited as ‘good practice’ the access to a large number of local community organisations focused on resettlement, rehabilitation and the needs of minority groups. On a daily basis and under Zahid’s stewardship, they extend their spirit of kindness, humour, patience, generosity and compassion to all.

“Zahid’s dedication, concern for others and the positive spirit he brings to our department are admired by all who work with him [and] his exemplary leadership has driven the success of Wormwood Scrub’s Chaplaincy team and is widely appreciated.”

“The Chaplaincy team has grown enormously under [Zahid’s] leadership. Along with the 6 major faiths (Christianity, Islam, Buddhist, Jewish, Hindu and Sikh), Zahid has been successful in recruiting Chaplains for other minority faiths and non-faiths and across different denominations such as Pagan, Humanist, Rastafarian, non-religious, Mormon, Quaker, and Jehovah’s Witness Chaplains.”

“Zahid made an outstanding contribution in coordinating and managing support and care for staff and prisoners following the tragic death of a colleague. Zahid has gone beyond the call of duty of giving one-to-one pastoral care to multiple staff members. He has brought together resources from multiple establishments very effectively and efficiently.”

“During the Covid-19 Lockdown period, despite a dramatic reduction of chaplaincy staff and suspension of all congregational/group activities, Zahid has been instrumental in setting up other platforms to ensure provision of chaplaincy services. Using sensitivity and wisdom, he has managed the Chaplaincy team during this period and ensured prisoners of all faiths are well supported behind their doors.”

Gina Pearce, Head of Reducing Reoffending at HMP Wormwood Scrubs says Zahid “works with tremendous dedication in his role as Managing Chaplain at HMP Wormwood Srubs. He has built up and coordinates an exemplary multi-faith team, which includes 100 volunteers from the local community, to support the diverse needs of the prison’s population.

“Zahid, who is popular, selfless and extremely affable, has established a highly respected and active volunteer Care Team to support staff care and welfare. He personally works tirelessly to contact staff out-of-hours who have been injured on duty, have personal difficulties or are in distress. This beacon of best practice of peer support has been shared with the wider London region – taking on the role as London Prisons Care Team lead – and with the prison service as a whole. He has recently piloted the introduction of TRiM training for the Care Team to better identify and support staff affected by trauma.”

She adds that “last year’s carol service was a great success”, and with 175 visitors from the community taking part, “it brought great joy to the prison and they left full of praise for the experience.” Meanwhile, Gina says, Zahid’s “successful management over Ramadan and Eid, enabling over 300 prisoners to observe their fast and pray despite the suspension of congregational activities, is testament to his significant contribution on the front-line and assistance in maintaining prison safety and stability.”

Sara Pennington, Governor of HMP Wormwood Scrubs, described Zahid as “an extremely dedicated member of staff at HMP Wormwood Scrubs who is well respected by both staff and prisoners alike.” She also noted that during the Covid-19 pandemic, “the ‘exceptional’ chaplaincy service he has built has continued to effectively support men at a time when it has been needed most.” She concluded by noting that “Zahid’s dedication, concern for others and the positive spirit he brings to the prison community is valued by myself as Governor and everyone who knows him.”

Zahid himself generously praises his colleagues, faith ministers and volunteers delivering “both religious and pastoral care to our residents and staff within the establishment. With the aid of Official Prison Visitors, Bereavement Counsellors, and through-the-gate mentors, the Chaplaincy department has been a critical resource to both residents and staff.” He modestly describes himself as “fortunate in being able to facilitate a number of faith programmes, and festivals, for our residents”, adding that he “takes pride in the fact that my chaplaincy team are an integral part of our establishment.”