AWARD WINNER 2020-21: Wayne Hodges works for the National Drug Strategy and Delivery Team at HMPPS HQ, and received an Award for his work helping create and lead an innovative and successful Incentivised Substance Free Living scheme, developed for the ‘10 Prison’ project, which is now being explored more widely across the estate.
[This Award is supported by Mitie Care & Custody.] 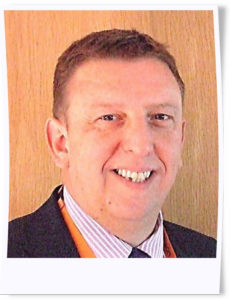 Initial nominator Hannah Dewsbury, Drug Strategy & Delivery Team Project Support, explains that “Wayne’s personal attributes in the way he leads and supports his team even through difficult circumstances are exceptional”, adding that “his determination and caring attitude towards those men and women in our care who are suffering with addiction issues (amongst other issues) is inspiring to his fellow colleagues.” She notes that “rather than looking at what is easiest for the organisation in terms of structure, Wayne always considers what these vulnerable people need from the system and how we can improve services.”

The “progressive not punitive” scheme Wayne created initially met with resistance, she explains, and took a great deal of effort to establish.  Incentivised Substance Free Living (ISFL) was launched in 2018 and rolled out as part of the 10PP. “Wayne worked tirelessly putting a lot of time into this project and his passionate attitude really was key to its success. All whilst continuing to work as an active member of the Drug Diagnostic team, travelling the country spending many nights away from family visiting establishments.”

The outcome is impressive, with ISFL successfully operating in 11 establishments and 11 more in the planning stages of opening an ISFL unit – and 4 establishments have or are now planning to open a second ISFL unit.

Feedback from prisoners has been positive, too: “ISFL is a community – where we’re given the best chance of integrating with the correct services to help us form a more stable and drug free life”, wrote one. Another calls ISFL “A place that has become a community with trained staff & peers alike, it’s bully-free.” A third testimonial has a moving conclusion, too: “I wasn’t doing anything but fighting and causing trouble, I have been on ISFL 3 months now and they gave me a chance to sort myself out. I am now on the servery and helping an ill prisoner on the wing”.

ISFL has had positive feedback from staff, too. “The level and quality of interaction between the staff and the men is exceptional,” says one colleague, “there are a lot of FMI [Five Minute Intervention] skills being used on this unit.” Another adds that “there is a real sense of community on the unit with the men having a say and taking ownership of how the unit is run with regular forums to voice their concerns and ideas with staff.” Finally, an independent review commented that “ISFL has been one of the biggest successes from the 10 Prisons Project”.

Hannah adds that in a difficult year, Wayne also offered impressive support to a senior colleague, helping induct her into the culture and style of both Head Office and establishments. She concludes with a touching personal note, “as someone ‘young’ in their career, Wayne is a manager and leader that I aspire to be like.”

Rachel Radice, Head of Drug Strategy & Delivery and Wayne’s Line Manager, shares more about the support he offered her. She joined at a time she was facing challenges at home, and noted Wayne’s “natural leadership role”, extensive knowledge of the working of HMPPS via his 25 years of service and, “most significantly and outstandingly, his commitment to the drugs role. I asked Wayne to become my deputy, and to act as team lead.” Wayne then “inducted me into the team” at a difficult time and helped ensure the team’s high standards continued.

Rachel says Wayne “always has a smile on his face”, and praises his flexibility, especially during Covid, and notes that he is developing “different ways of working given that we are unlikely able to go back to our team visiting prisons in the same way.  This shows Wayne’s strategic planning/thinking, and how he is always looking to develop how the team respond to new challenges in demanding times.”

Diane Caddle, Executive Director of Safety & Rehabilitation at HMPPS remarks on Wayne’s “highly commendable” commitment to his work, team, and service users, and on establishing his ISFL initiative which “has not been easy but his passion is clear and has been key to the positive outcomes felt by both staff and users.”

Wayne himself explains more about the ISFL experience, which “was sometimes difficult to deliver in prisons where previous projects had not been successful and some staff were sceptical.” So he set up “support visits in all 10 prisons and a quarterly workshop to bring all of the project leads together to share ideas and discuss problems; this had a really positive effect of sharing experiences and driving progress.” Encouraging results showed that “if men were treated differently, they would respond differently.” Training was also offered and delivered to prison staff by the substance misuse providers, says Wayne, “and a really good example of this was at HMP Leeds who held training days with all staff from the ISFL unit and substance misuse providers to discuss what was working and what made the unit different.” He generously praises the staff involved in this project as “the real drivers of the success – they really just needed support and the opportunity to try something different.” Wayne says “we now have over 25 prisons looking at this approach and wishing to implement an ISFL type unit in their prison.”

He concludes with an expression of his Award-winning ethos: “I have always strived to progress the teams I work in and it is important to me as active coach to encourage all to fulfil their potential wherever they are in the organisation.”