COMMENDEE 2015-16: Walter, formerly a Residential Officer at HMP Shotts, receives a Commendation for his contribution to the management and care of Veterans in Custody, both in the prison and across the Scottish Prison Service. 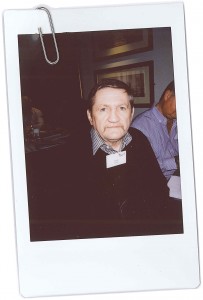 Walter Logan is a Residential Officer at HMP Shotts and is Commended for his outstanding contribution to Veterans in Custody across the Scottish Prison Service (SPS) estate.

His initial nominator, James Cairnie, of the Research, Strategy, and Innovation unit at SPS Headquarters, describes how Walter Logan, while carrying out his daily work duties, “has been instrumental over the last 5 years in promoting the interests of military veterans who have become embroiled in the criminal justice system and find themselves serving a custodial service.  Walter has acted at a national level as champion on behalf of ex-service personnel in prison and has assumed a lead role in setting up a Veteran in Custody Support Officer (VICSO) in every establishment in Scotland. He has also taken on the role of convener of the national VISCO Working Group which meets bi-annually to discuss current issues and promote contact with relevant agencies within and outwith establishments.”

James goes on, “Walter has actively encouraged the participation of community based veterans agencies in ex-service personnel issues in custody, an area previously neglected. Community veterans groups are encouraged to ‘reach in’ to ex-military prisoners to appraise them of the services and assistance they can provide to them and their families, while serving a custodial sentence and also, equally importantly, on release back into the community. It is an information and  ‘sign posting’ initiative for those veterans who wish to avail themselves of the services on offer in respect to issues such as accommodation, pensions and finance, substance misuse and stress. As well as the local VICSO ‘champion’ working with known veterans, they also have an equally important role in encouraging – through posters, leaflets, publicity and ‘word of mouth’ – those veterans who may have chosen not to reveal their service record to come forward to benefit from the specialist assistance on offer from veterans associations.  Walter’s role in promoting these activities has been key to their success.”

Among other initiatives, Walter has produced a bi-annual Veterans Newsletter “which publicises activities within, and services for, the veterans’ community in custody”, says James, who adds that “this was an accomplished piece of work and received recognition from senior management in the Scottish Prison Service and in Scottish Government.” In addition, Walter “collates, analyses and disseminates veteran population statistics and trends for establishments and the Service through quarterly reports.”

As well as sitting on the Scottish Parliament Cross Party Group on Armed Forces Veterans, Walter has attended conferences as a speaker on the development of the role of the VICSO in Scotland. James adds that “he also played an active part on the organising committee of a recent Poppyscotland conference which brought key parties together to discuss and address community reintegration issues faced by veterans”, describing how “on his own initiative Walter has made contact with the then HMCIP, Brig. Hughie Monro and the current Scottish Veterans Commissioner, Eric Fraser, to invite them to visit Shotts to observe the work of SPS in helping ex-service personnel to rebuild their lives in a pro-social manner by promoting an assets based approach.”

He concludes by saying that Walter’s “enthusiasm and commitment have been exemplary and it would be fair to say that the VICSO scheme and SPS’ understanding of, and commitment to addressing, the particular issues faced by forces personnel in custody would not be as advanced as they are today without Walter’s dedicated input.”

Butler Trust Local Champion Sharon Baird, Senior Human Resources Officer at Shotts, calls Walter “a significant driving force behind the work currently undergoing within the Scottish Prison Service in relation to Veterans in Custody,” and says that his work “links closely to the development of quality relationships that exist between officers and prisoners; it is centred on individuals in order to close gaps in service provision, training and coaching fellow colleagues in working with prisoners.”

Paul Malone is First Line Manager at Shotts, and says Walter “has liaised continually with representatives from the armed forces and support organisations for ex-service personnel and has made a tangible difference to the lives of veterans in custody and their families.” Unit Manager Mark Stuart adds that Walter’s involvement in developing the Veterans in Custody “has been ground breaking in the SPS leading the way in recognising problems and links to offending by veterans in their adjustment to civilian life.”

Shotts’ Governor, James Kerr, says that “As a Military Veteran himself Walter approaches his responsibility to other Veterans with clear compassion, professionalism and understanding. He is a long serving and experienced member of our team and is held in very high regard both by his colleagues and by the people he supports.”

A decade ago Walter began looking at the Armed Forces Covenant “and the effect it would have on the help available to all ex-forces personnel and their dependents.” He goes on, “Having served 24 years in HM Forces I joined the Scottish Prison Service and realized that within the prison population there were a great number of ex forces actually serving sentences. Those prisoners who fell into this category I realised needed to be able to access the help offered for them and their families by the Forces charities. It was with this in mind that I put into place the Veterans in Custody program within the Scottish prisons; and as the National Coordinator working in conjunction with prison governors, I put in place a Veterans liaison officer (preferably ex forces) in all prisons in Scotland.”

Walter makes a notable point – which came up in one of the 2015 Butler Trust practice-focused thematic workshops, on ‘Veterans in custody and the community’ (written up here) – that by facilitating help for ex forces offenders “we give them back a pride in what they can achieve during their imprisonment” in addition to “a sound stepping stone to release back into the community.” As Walter notes, “a newly installed pride in themselves can be an asset to the community and not a burden, especially financially. They are giving back to the community.”