AWARD WINNER 2014-15: Trevor is granted an Award for his dedication and professionalism over four decades as a PE Officer, as well as for his contribution to all aspects of prison life at HMP Exeter. He was nominated by 15 prisoners, one of whom described Trevor as “a gentleman and a role model for all staff”, while his Governor praised “his jailcraft [as] some of the finest I have seen”. [Trevor is also granted the Keith Bromley Award for Education & Skills Training.] 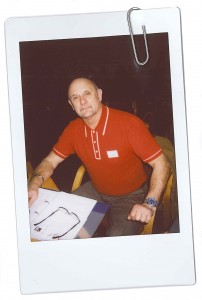 Trevor Lewis is a Band 4 Specialist PE Officer who works at HMP Exeter – and is the oldest Physical Education Instructor in the country’s prison system. That he was nominated for his Butler Trust Award by no less than fifteen prisoners itself speaks volumes.

As Mark Omand, Custodial Manager in the People Hub points out, not only was Trevor’s nomination fully supported by colleagues and offenders alike, Trevor is a very longstanding member of staff “who is universally regarded for his commitment, motivation, skill and humour.”

None of his colleagues at HMP Exeter are surprised that so many inmates took it upon themselves to nominate Trevor. “He has a unique ability to engage at every level, and encourage all ages and abilities to engage with wellbeing and take care of themselves as a way of managing their time in custody,” says Mark. “He is a charismatic man and yet there’s no side to him, what you see is what you get and people respond really well to that and respect him for it.”

Trevor’s positive approach encourages offenders to develop confidence and a sense of responsibility. Mark notes that Trevor’s impact isn’t only seen in the gym, but across the prison. In particular Trevor is a committed supporter of the HMP Exeter all day family visits, during which he provides activities.

With a growing recognition of the role of family cohesion in reducing reoffending, such visits are clearly a vital part of maintaining the kind of successful relationships on which prisoners will rely as they transition out of prison and back into the community.

Lee concludes, “He is a gentleman and a role model for all staff.” Jeannine Hendrick, Governor at HMP Exeter, concurs, adding that Trevor “sets a really good example to colleagues of how to go about meaningfully delivering ‘every contact matters’ in everything that he does. His behaviour is consistent whether he faces adversity or enjoyment [and] offenders respond to him because they trust him.”

The Governor makes a further point that reflects well on Trevor’s work. “With such a long career what surprises many is that Trevor is as committed, fresh and cheerful today as he would have been at the start of his career. He makes people smile, he encourages them, he makes them believe in themselves.”

Jeannine Hendrick, as a Governor, knows the importance of physical education instructors in a prison, and highly values “the contribution he makes to ensuring Exeter is a safe, decent and secure prison where offenders are engaged in meaningful and purposeful activity and maintaining family ties.” She goes on, “But more than that, he helps them to look to the future in a positive way. His jailcraft is some of the finest I have seen, a consummate professional.”

Trevor is entering his fourth decade as a serving prison officer, and at 66 years old is not only the longest serving but, as he points out, also “the oldest ever Physical Education officer in the business!”

Trevor was surprised and ‘humbled’ to be nominated, not least by so many of the offenders under his charge. Several of the prisoners describe him as “a top bloke.” One calls him a “stand up guy…brilliant,” and another notes that “although he always gives us a hard time, he always gets the best out of the boys.” “He’s helped me through a lot of hard times,” adds one prisoner, while a man who has been inside for 20 years calls him “the best instructor I’ve come across.”

The enormous affection and respect that comes across in a nomination supported by so many prisoners, coupled with the deep regard of his colleagues, speaks eloquently of Trevor’s qualities. One of the prisoners who nominated Trevor added a further observation as a testament to Trevor’s capacity to work with good humour, too. “As you can imagine motivation and commitment in the Prison from prisoners can be very low but PEI Lewis has both these in abundance and with the right person these can be very contagious characteristics. PEI Lewis spreads these characteristics throughout the prison but also adds another element which is highly lacking in the prison – laughter.”

Finally, Trevor’s own words succeed in capturing something of his enduring positive attitude. “I still feel immense pride over being a humble PEO and I love the job now as I have always done,” he says. “I look forward to continuing as long as humanly possible.”