COMMENDEE 2014-15: Thomas was nominated by a prisoner and receives a Commendation for all-round excellence as an Officer at HMP Lancaster Farms; he is described as the “go-to contact point” for both prisoners and staff across the establishment. 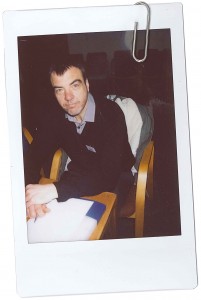 Thomas Gallagher, who is approaching almost a quarter of century as a Prison Officer, is recognised by the Butler Trust on this occasion for his outstanding work over the last seven years at HMP Lancaster Farms; his joint nomination is further distinguished by coming from both a prisoner and a senior colleague.

Tom is clearly a superb role model for colleagues and offenders alike, and this gift lies, in part, in his deeply considered approach to his work. Co-nominator John MacCalman, Band 4 Supervising Officer at HMP Lancaster Farms, who has known Tom for sixteen years of his service, explains that “Tom has created a benchmark here at Lancaster Farms where his professionalism and consistency of approach with both his colleagues and those in his care is second to none.”

A repeated theme in the nomination is a gift of empathy, a subject on which Tom himself is particularly eloquent. “From the start of my service when I talked about being empathetic it was frowned on as weak, staff felt uneasy with this concept, but I have persevered in my approach and now I feel that this approach is becoming the “norm” within the prison service and certainly here at HM YOI Lancaster Farms.”

This shift in attitudes over the years in the prison sector is certainly in part attributable to the daily accumulation of work by inspiring officers like Tom, who shares the insight that “empathy is a value currency. It allows us to create bonds of trust, it gives us insights into what others may be feeling or thinking; it helps us understand how or why others are reacting to situations, it sharpens our “people acumen” and it informs our decisions…it is about investing a little bit of time and effort into the young people we look after.”

CT, the co-nominating offender, adds flesh to this, highlighting the compassionate character of Tom’s approach. He notes how Tom “took a chance on me…I feel I can talk to him about anything at any time and he will always take the time to listen. In his “Tribute to Mr Gallagher”, CT finishes by stating that “without Mr G I would probably have been lazy and not bothered about myself or my family. Mr G has taught me to care about the people I care about. I’ve been in and out of jail since I was 18. With Mr Gallagher’s help and support I understand that the decisions I make…affect me and my family. He has helped me to understand what I need to do to stay out of prison…a top officer.”

Another offender added that “Mr Gallagher trusted me and showed me respect by not treating me like an idiot, he listens and helps me and because of that I want to do a good job for him. I don’t want to let him down.”

As HMP Lancaster Farms undergoes a change in role from young offenders to adults, Tom has provided mentoring and support for staff, keeping them aware of what’s happening to such an extent that he’s become “the go to contact point for staff and prisoners,” says senior officer Stephen Donnell.

Tom himself, while taking great pride in his nomination for his work, generously notes that “it has been a team effort and I would like to thank the other members of my team at Lancaster Farms who do some equally outstanding work.”

He adds a telling point about safer custody, saying that “at the core of my belief is that all prisoners have to feel safe. If we can create this feeling then I feel that this will allow prisoners to focus on rehabilitation and making a change in their lives.” Tom recognises, further, that changing their lives will change other people’s lives too: “I think along the lines of ‘these young men are going to live next door to someone, so it is in all our best interests that we help make better citizens of them whilst in custody.”

One member of the final sifting panel was deeply moved by Stephen’s closing remarks (a teary moment on a train journey was mentioned). And that’s understandable: for these profound but simple words evoke the oft unsung difference that outstanding work, of the kind the Butler Trust exists to highlight, can truly make in people’s lives:

“Tom is sadly approaching the twilight of his career,” Stephen wrote, “yet his passion and desire is as strong as ever. He will never invent a cure for the common cold or play at Wembley, but in his own way he has touched the lives of thousands and changed them for the better.”