COMMENDEES 2014-15: Sarah, Lisa and Shae are a multi-disciplinary group granted a Commendation for the commitment, passion and belief they have bought to their work to tackle gang violence and create a safer environment at HMP Thameside. 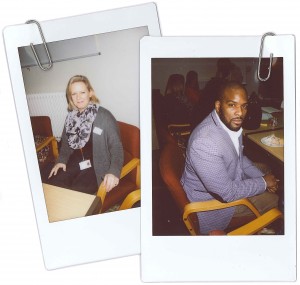 Sarah Chambers, Lisa Rafferty and Shae Wright have together forged a powerful team to tackle gang violence at HMP Thameside, delivering remarkable results – and a much safer environment for both offenders and staff.

HMP Thameside opened in March 2012, and when young offenders from across London started arriving in July, they brought a knotty and complex problem which proved resistant to existing sanctions: gangs. Lisa, Sarah, and Shae brought a strong combination of skills and expertise to bear on the problem, and the result of their work saw an impressive reduction in violent incidents from 86 to 26 per month. As they themselves note, and nominator Jeanne Bryant, Head of Custody at HMP Thameside, reiterated, that’s 60 fewer victims, 60 fewer people being hurt, and 60 fewer “families worried about the safety of their loved ones in custody”.

Although working together, each brought particular experience and abilities to the team. Lisa works as the Security Manager, Sarah as the Violence Reduction Supervisor, and Shae, as a Senior Case Worker with Catch22, HMP Thameside’s partner, has significant community experience working with gangs. Violence Reduction (VR) reps have also playing a significant role, not least because they can often identify problems, and communicate with offenders, in ways that are not always open to staff.

In addition to the raw reduction in gang violence, the overall impact on staff and offender perceptions of safety has been noted. NOMS reported being “really impressed”, noting the commitment of both the Violence Reduction Team and the VR reps. “It’s clear you’ve put a huge amount of work into developing and embedding the VR strategy,” continued the NOMS feedback, “and that as a result this is part of life at Thameside.” NOMS now plan to inform colleagues including commissioners and those in the Commissioning Strategies Group, adding “We think it’s important that people are aware of the good work you are doing.”

Jeanne makes a further point, “It is not policies or the procedure that has made Thameside safe, it is the commitment, passion, and belief by the people who deliver it,” and observes that “without Lisa, Sarah and Shae, I would be presenting a very different picture, one that prisoners would not like to be in.”

This last point hints at quite how serious gang-related violence can be in a custodial setting. It can have direct links to serious offences, including murder, in the community, and the weapons involved have often been “designed to create maximum damage/injury.”

Linda Clery, Business Services Manager at HMP Thameside, emphasises the “extraordinary” level of team work shown by Lisa, Sarah and Shae, without which “they could not have achieved this amazing success.”

Lisa’s work has focussed on intelligence, in particular, and co-ordinating it both within HMP Thameside and externally, via links with the Metropolitan Police’s Trident Gang Crime Command. The role of VR intelligence is important, too, with the development of rigorous systems for ‘early warnings’, and the identification of potential problems, to be rapidly circulated by the team throughout the prison. Acquiring intelligence alone is not enough, and Lisa has been particularly praised for her dedication and drive in ensuring intelligence gets distributed – and acted upon. Without that determination, adds Linda, “the results of the team would not be so significant.”

Sarah was tasked with revising policy and implementing new procedures in response to the gang problem at HMP Thameside. She also introduced behaviour plans for prisoners linked to regime level. Prisoners found these difficult to accept initially, but responded well as they began to appreciate that they were designed to help support them. Sarah has also worked training prisoners as mediators, thereby heading off many problems at an early stage before they became exacerbated.

Shae has worked with vulnerable adults in the community for more than a decade, and capitalised on this experience in his ‘mapping’ of gang territories and, critically, safe areas, directly into the prison context. Interestingly, as Linda notes, “Shae did not see Thameside as a prison but as London town where gangs have established invisible territorial perimeters.” Shae ensured prisoners were interviewed within hours of their arrival, and identified gang affiliations, gang conflicts, and any other violence-related issues liable to put staff or offenders in HMP Thameside at risk.

As well as NOMS, a recent report from HMIP praised the meaningful consultation with prisoners, the prison’s alertness to the risk of vulnerable prisoners being victimised, and the “particularly impressive” gang-related work.

Their work has proved so impressive, in fact, that Serco now plan to promote the good practice and policies involved across all their custodial contracts – including one as far afield as New Zealand!