AWARD WINNER 2020-21: A Prison Officer for over 30 years, and described as a “remarkable individual” and “an inspiration to the men”, Ricardo is granted an Award in recognition of his unflagging commitment to rehabilitation, and in particular his creative approach to addressing knife crime and gang-related violence, at HMP Pentonville.
[This Award is supported by MTC.] 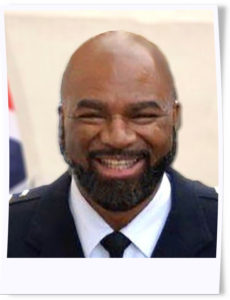 His initial nominator, Kathryn Lawrence, HMP Pentonville’s Head of Residence, points out that “Rick is being nominated for his innovation and motivation rather than length of service,” and calls him “a remarkable individual who has been an inspiration to the men and young men on our wing.”

She explains that he has approached “the growing issue of gang violence in our prison with a spirit of openness, ingenuity and forward thinking. Harnessing modern technologies and entertainment platforms, and understanding the impact of trauma on an individual’s behaviour, he has made a genuine and meaningful difference to the lives of the men he works.” She says that “what sets Rick apart is that, even with his significant number of years in the service, he will not settle or accept a problem as it is. He continues to strive for new solutions and has relentless energy and commitment to the men in our care.”

Following a period of instability and gang violence, she explains, Rick arranged an inspiring event, “Time4Change”, which included both young adults and ‘elders’. He reached out to Kevin Obi Akudike of Dice Recordings, who in turn enlisted artists on his label to “an inspiring line up of relatable stories for our men.” These included “the infamous ‘Big Narstie’ who took to the stage to talk about how his childhood had started with drug dealing on a Brixton council estate and is now a successful artist with his own Channel 4 TV show.” These tangible stories of change, says Kathryn, “were hugely inspiring for the nearly 100 men who attended.”

Rick also worked in partnership with the award-winning ‘Bird podcast‘, a series examining criminal justice issues, to create an episode on knife crime. “It was an incredible piece of work,” says Kathryn, “which moved away from accounts of crimes that we may be more familiar with. The end product was deeply moving, incredibly exposing for those who were involved, and prompted some serious questions, and plausible solutions, for how young men end up carrying and using knives, and what could be done to break this cycle.”

Feedback on the podcast was incredibly positive, and it was also picked up by National Prison Radio. Many found talking about their experiences, often for the first time, difficult, so Rick arranged “follow up wraparound trauma counselling sessions to ensure that there was a safe space for the feelings and emotions that had been raised during the creation of the podcast.” Ricardo himself adds that “The listening party we had where the men were able to listen to the finished product, and listen to the feedback from the public, was very moving and allowed the men to feel they mattered, and that their voice and experiences are valuable.”

Kathryn concludes by noting Rick’s “infectious enthusiasm, personal commitment and innovative approach to working with our young men”. Sarah Poynton, Head of Safety & Equalities and Butler Trust Local Champion calls Rick’s nomination “richly deserved”, and shared a number of testimonials from the prisoners themselves, which powerfully express the impact of Rick’s work. ‘GP’ writes “He gave me the opportunity to be a part of something great. I believe in the ‘Time4 Change’ programme and it has installed that belief in me!”, while SS says simply “Because he believes in me.”

Head of Young Adults, Jack Issac, also received “numerous letters from prisoners highlighting the influence that Mr Dyer has had on their lives and offering thanks for the way the project has been set up and the difference that it has made.” Jack adds that “as well as influencing prisoners, Rick’s passion to create positive change has inspired staff across the jail to be involved in offering guidance to prisoners, and Rick is widely known as someone to whom staff can go to for advice and support.”

Sarah concludes that “it’s hard to distil what it is about Rick and his passion, belief and drive that works – but what I wholeheartedly believe is that these young people’s lives would be worse off, if he wasn’t in it.”

HMP Pentonville’s Governor Ian Blakeman also wrote a powerful testimonial: “Rick is amazing! His constant motivation in tackling violence based upon postcodes is life-saving. He has recognised that many young lives are wasted and that people will kill based on community disputes. He has put his efforts into saving lives and he makes a real difference. I find him an inspiration and believe this is one of the most worthy nominations I have ever seen.”

Ricardo himself explains that his work began by developing a forum on his wing for Young Adults “with the aim of giving them a voice and platform for them to express their views, have an input into the wing regime and promote positive change. The forums allowed the prisoners to discuss issues which they felt were of importance within the prison and suggest ideas and ways of making change. The format was a success, so I rolled it out throughout the prison.”

Building on this, he explains, “the Governor created the role of Custodial Manager for Young Adults to which I was successfully appointed.” He expanded his work into ‘Time4Change’, a 12-week course with social aspects, discussing topics like gang life, young fatherhood, forgiveness and conflict resolution, as well as educational aspects around job opportunities, starting businesses and life skills.

It also became apparent, says Ricardo, “that many of these young men’s lives have been affected by many negative experiences”, so trauma counselling was offered both to groups and one-to-one. Prison staff also took part, sharing their views and experiences, and listening to feedback from the men. “This allowed the prisoners to see staff on a more personal level and develop relationships. A key feature of each cohort is that older prisoners from each wing are allocated as mentors to the young adults in order for them to provide advice, support and guidance throughout the process. This also allows the older prisoners to have a place in the groups and feel valued. The feedback from these groups has been fantastic, young men have been able to build up better relationships with staff, violence across the establishments has reduced, and there has been an increase of self-esteem, confidence and enthusiasm across the cohort.”

Ricardo modestly hopes the Award will “inspire the members of Time4Change that change is possible and with the right support and resources, we can go far.” Indeed we can.