AWARD WINNER 2021-22: TPaul is granted an Award for his exceptional work with West Sussex Youth Offending Team. Winning widespread praise from colleagues for his “enthusiasm”, “compassion”, and “creativity”, he “has a heart of gold” according to one young person, while to one of their parents “what Paul does is beyond words”.
[This Award is supported by Ingeus.] 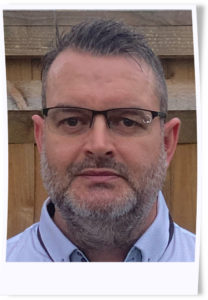 The accolades from both colleagues and the young people Paul Wood works with on reparation all agree: he’s “the real thing”. Over his twenty-year career, he’s become that rare person who reminds people of the essence of why they do the job. Described as “enthusiastic”, “tireless”, “creative”, “committed”, and “passionate”, these words don’t quite do him justice, though. As the father of one young man says “it’s beyond words what Paul does”.

Sally Pescott, who has worked with Paul for 18 years and is now his manager, says Paul “has never failed to impress and inspire me with his devotion to his work and, most importantly, the young people he works with. Paul always looks for the ‘hook’ to engage a young person and believes 100% that it is our role to find this in order to get alongside them and help motivate and support them to make the positive changes in their life. He never gives up on a young person and will always look for a different way in, if needed.”

And he’s a fount of creative ideas to find that ‘hook’ or way in, too. Like the ‘Past and Present’ project, where he got young people to design questions and then interview people who had been in the armed services or grew up at the end of WW2. Another initiative had them wring ‘restorative questions’, and interviewing youth crime victims on tape to act as surrogate victim experiences.

“Whenever I hear Paul say, ‘Sally I have an idea’”, she says, “I brace myself as I know it is likely to be creative, challenging to achieve, and might take time to initiate. But I also know it’s likely to be a fantastic opportunity with positive outcomes for young people, the victim, a community, and that his passion and ‘can do’ attitude will make it succeed.”

The deep respect of his colleagues, management team, partners, young people and their families, derives from going the extra mile to help young people achieve, whether taking them to a college interview or sourcing funds for a second hand boxing bag – then driving thirty miles to buy it, so the young man could cope with COVID restrictions, with gyms closed, as he needed “an emotional outlet to help maintain family relationships.” Throughout COVID, she says, “Paul has continued to inspire, be creative, adapt and brought his unfaltering enthusiasm to make a difference”.

16 year old ‘K’ says Paul “has a heart of gold”, and a parent adds that “it’s beyond words what Paul does.” His infectious enthusiasm also extends to supporting his colleagues, especially those new to the work. Meanwhile Lorna Vincent – one of Paul’s former Line Managers and who has been in Youth Justice work for 25 years – admits she “sometimes plays a version of fantasy football” about her work – and that Paul is her first pick “every single time.” She explains why:

“Paul manages to see the good, the strength, the potential in every child he works with. Not in a rose-tinted glasses way that denies risk, but in a way that recognises they, like us all, are complex and can be a range of different things all at the same time, and that in the space of a minute they can be a range of different things again. He properly sees them, recognises them, values and connects with them. He does not judge; he seeks only to understand and help them. He shows unconditional, positive regard. He shows them care, acceptance and love. He is our secret weapon.”

Paul, like a lot of our winners, is himself self-deprecating: “I don’t feel that what I do is any more than is expected of me,” he says, generously adding that he is “surrounded by lots of passionate people and that only inspires me to want to do all that I can.” He concludes by saying that, as far as he is concerned, he “truly believes I have the best job in the world.”