AWARD WINNER 2021-22: Described as “inspirational” by the Governor, Nathan receives an Award for his “ground-breaking” work, as a Prison Officer at HMP/YOI Brinsford, helping to tackle gang-related violence in the jail – employing his drive and “fantastic rapport with prisoners” to achieve “outstanding results”.
[This Award is supported by Serco Justice Services.] 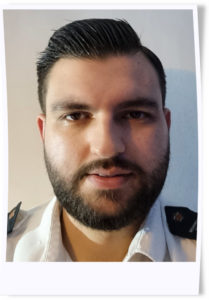 ‘A wonder to behold’

Nathan’s Line Manager, Jackie Quirke, calls his work “ground-breaking”, and says “we have seen violence amongst this cohort reduce every year since 2018 to its lowest level – and on his unit there were no acts of violence for a prolonged period.” Nathan makes such a positive difference, she believes, because “he has a fantastic rapport with prisoners, and makes it his business to personally get to know them – so they feel listened to and valued – so they take him into their trust and talk to him about subjects that they would not normally disclose.”

Nathan undertakes does much of this work in his own time, often completing research at home and bringing information into work to support the prisoners and staff. Liaising closely with other departments, Nathan makes sure important information is shared and supports local safety and security priorities. Linking different parts in this way has delivered “outstanding results”, and his actions “have minimised harm to others – and allowed integration to work well in our prison.” It’s a proactive approach based on a deep knowledge of different gang cohorts, adds Jackie, which “ensures that we manage them appropriately.”

Senior Officer Dan Jowett says: “Nathan has made our unit safe and help us understand our prisoners”, calling him “the backbone of Residential 4.” His Line Manager there agrees: “Nathan understands our men and knows how to keep everyone safe – without his input we would still have high levels of violence.” A safety analyst says Nathan’s work “is such a significant contribution to our management of those connected with gangs that it would not be possible for some prisoners to be residing on units without his input.” Jackie concludes by calling him “a wonderful ambassador”, and says “his commitment is truly wonderful.”

HMP Brinsford’s Governor, Amanda Hughes, says Nathan is “inspirational” and calls his drive and determination to make our establishment safer by encouraging staff and prisoners to work together “a wonder to behold.”

Nathan’s work dates back to 2016 when he began working closely with a group of prisoners known to be active gang members. By building relationships with these prisoners, he says, “I became privileged to a lot of information which allowed me to understand gang members on a different level. Over the last few years this has allowed me to work closely with our security department so that we could attempt to keep these members separate to rival gang members. My understanding of the areas, and the gang members affiliated to these areas, meant I was able to locate four different gangs on one landing so they could mix and yet the risk of violence was extremely low.”

Nathan expanded his work in other ways, too, like inviting an ex-gang member into the prison to give a workshop and offer advice “to help support a change in their mentality.” He also encouraged some gang members into a drama workshop and a month later they performed a play in front of an audience. Meanwhile mass fights have dramatically decreased since Nathan started working on this, and violence overall also decreased. He concludes by saying that he continues to seek outside support workers to come into the establishment “to help work with these prisoners so that they can have opportunity whilst they are in custody to change their mindset upon their release.”