COMMENDEES 2014-15: Custody Manager, Kath and Officer, Toni receive a Commendation for creating an outstanding Safer Custody provision at HMP Ashfield, including a drop in centre, relaxation rooms and a communal garden. 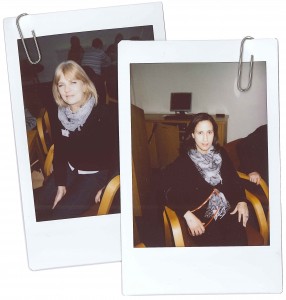 Kath Brown and Toni Hillier are the Residential Manager and Prison Custody Officer respectively of the Safer Custody Team at HMP Ashfield. Working as a close-knit team, they developed a notably outstanding level of safer custody provision and services after HMP Ashfield changed to Category C Sex Offenders from its previous role with Young People.

Many of the new population had been identified as ‘poor copers’ with complex needs. Although neither Kath nor Toni had previously worked in Safer Custody, they took on the challenges of developing a completely new service at full tilt, which has now received a green safer custody audit. As nominator Rebecca Pestell, of the Safer Custody team at HMP Ashfield, says, “whilst this external verification is gratefully received, it doesn’t highlight the innovation and dedication both Kath and Toni bring to Safer Custody.”

As well as appointing “an army of Safer Custody reps”, Kath and Toni drew on these prisoners’ skills to generate an impressively rich and varied timetable, providing daily sessions ranging from Tai Chi and yoga to model making and guitar lessons, strategic war games and a gardening club.

With no budget to speak of, they commandeered a room in the education corridor and set up a “drop in centre”. Overseen by an orderly, these sessions are described by Rebecca as being “the lifeblood of Ashfield”, and “pivotal to the success of Safer Custody in reducing individual’s risks and encouraging engagement.”

Thinking in the round, Kath and Toni identified that many of their vulnerable prisoners were uncomfortable using the gym when more outgoing and confident prisoners were there, and with the help of a gym orderly they started a gym session specifically for Safer Custody. The many positive impacts of physical education (explored in a Butler Trust Workshop last year) were soon apparent among this group, including improved mood and self-esteem, as well as the opportunity to release anger that might otherwise have manifested itself in self-harm.

Kath and Toni have also developed relaxation rooms, with comfortable seating, soothing music, lights, and aromatherapy oils, for those suffering from high anxiety. Others, who may be going through a crisis, are catered for by another initiative they developed, a listener scheme called “Here to Hear”. This involved training a cohort of prisoners and providing a suitable environment for them to work in. The scheme benefits from Mental Health support and supervision, and Kath and Toni are now working to have “Here to Hear” accredited.

In Rebecca’s own words, “I sometimes can’t quite believe what these two have achieved in such a short space of time (9 months) and with so few resources…They’ve captured the imagination of prisoners and mobilised them to create an excellent provision. I think their achievements are nothing short of miraculous. I am utterly in awe of Kath and Toni and proud to have them in my team. I never fail to be astounded by their knack of knowing at least something about each of our 400 prisoners. I regularly receive letters from prisoners telling me that Ashfield’s Safer Custody is the best they’ve ever experienced and this is all down to the dedication and innovation of these two individuals.”

Although Kath and Toni clearly act as a highly effective duo, they bring complimentary skills to bear on their work. Kath is described a “a highly skilled, experienced Residential Manager who has an enviable reputation for getting the most out of offenders, and particularly those most vulnerable or presenting with very challenging behaviour.” Her creativity and inventiveness, and knack for adding value to all her roles, are also praised by colleagues.

Toni has a “certain way” with prisoners, a knack that allows her to “seemingly always be able to calm the most agitated and motivate the least engaged.” Described as “always willing to go the extra mile for those in need”, Toni, says, Paul Richardson, Assistant Director of Governance and Services for HMP Ashfield, is “a true professional.”

HMP Ashfield’s Contract Director Ray Duckworth concurs, praising Kath and Toni as “inspirational…their energy and enthusiasm is incredible, placing the prisoner’s welfare at the centre of what they do” and providing stability for those who are “irrational and erratic.” The benefits of their work, including a garden that allows prisoners and staff to ‘escape from the pressures that prison life brings’ are enjoyed not only by vulnerable prisoners and staff colleagues, but the wider community who will benefit from the impact on reduced reoffending.

Kath and Toni have developed a wide range of partnerships with local community organisations, including charities, and are particularly keen on extending the impact of their work by sharing good practice.