COMMENDEE 2014-15: Julie receives a Commendation for her calm and committed work as a Probation Case Administrator in Wiltshire; she is described as “the glue that holds the team together” and “a true leader amongst her peers”. 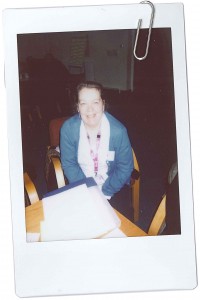 Julie Greenslade, who works as a Case Administrator (CA) in the Probation Service in Swindon, has quietly acquired such a reputation that she’s been hailed as “the glue that holds the Swindon Team together.”

As Lisa Potter, the Pathways Development Officer at Wiltshire Probation Trust, points out, “Case administrators are rarely in the limelight, but ask any Offender Manager who they would like by their side in a difficult situation and/or a major change and they would all say Julie Greenslade.”

For over a quarter of a century, Julie has been “highly efficient and professional,” says Lisa, adding, “she is the heart and soul of many initiatives. Calm, caring, and with an easy sense of humour, Julie keeps everyone on an even keel.”

Julie brings so much experience to bear that not only is she ‘deft’ at dealing with offenders and their concerns, she also knows the ins and outs of every process and the background to all the complex criminal justice partnerships.

A senior colleague adds that Julie is “like a dog with a bone”, with a gift for chasing down every last detail – and cites examples where she’s picked up small but important details and followed them through in circumstances which, for example, have led to an arrest and a consequent improvement in public safety.

Another senior colleague, a Team Manager, had this to say. “Julie has a quiet and caring nature…it is rare that you meet an individual so committed, one with personal values that live true to our everyday work.”

Julie is an excellent example of someone with the kind of quietly effective, but hitherto unsung, commitment to her role that the Butler Trust was founded to recognise: people who not only get on with the job at hand, but all too often ‘go the extra mile’, without expectation of any reward other than the satisfaction of doing something very well.

Time and again, colleagues make the same type of comments about Julie, in slightly different language, building up a picture of the kind of character that many teams are lucky to have. She is described by her peers as “a real asset to the Swindon Team and a valued link”, “instrumental in my early development”, someone who “still has a great enthusiasm for her role and has a great ‘zest for life’” and “isn’t afraid of change.”

“Julie is supportive and caring and is a constant who can hold things together,” adds another colleague. Julie also has a strong interest in victim liaison, and has set the benchmark for good practice in this area, which has been adopted by other members of the team.

The Deputy Director of Operations adds that Julie “was and remains a true leader amongst her peers, practical and efficient and bringing laughter and good humour to the workplace.”

“Julie,” says another colleague, “is the dream CA and every Offender Manager and service user can be confident she has every eventuality covered.”

One of those service users wanted to add his comments, too. “I used to get texts the day before and on the morning of the group. This really helped remind me. I always speak to Julie when my officer is not in and she answers most of my questions. She is helpful and always gets it right!”

To round out this picture, of one of the “unsung heroes” among the administrative staff, here is Julie describing just one element of her work. “I frequently make phone calls to offenders on behalf of the Offender Manager to check their wellbeing when they have missed appointments at the office. I think this benefits the wider public as they are less likely to go out and re-offend if they know someone is bothering about them.”

“It gives me great hope when I see the difference I am making by doing this job, not only to the offenders who come our way, but in relation to public protection and the victims of crime. I want to continue working for the National Probation Service,” says Julie, “it’s not just a job: it’s a part of me.”