COMMENDEE 2016-17: Johannes, a Physical Education Instructor at HMYOI Polmont, receives a Commendation for his all-round contribution to transforming the lives of the young men in his care.

Johannes ‘Gyp’ Penman is a Physical Education Instructor at HMYOI Polmont, whose inspiring work includes making Polmont the only such institution offering, and now fully licensed to assess, The Duke of Edinburgh’s Award. His contribution demonstrates once again, as several previous Butler Trust winners (and a workshop) attest, that physical education can deliver ‘fitness’ in the very widest and deepest sense of the word.

Nominator Geoffrey Weaver, Front Line Manager in Offender Management at Polmont, says Gyp “is an inspirational member of staff for the young boys in our care [who] not only looks for what is appropriate to deliver to our population but also what would be most beneficial to our boys. In every endeavour he strives to make the service he provides as professional and productive as possible.”

Gyp is responsible for several projects, says Geoffrey, “that directly reflect the curriculum for excellence [and] this led to Polmont being nominated for the Scottish Education Awards 2016 for the health and wellbeing category. Typically of Gyp he did not attend this event as he had a meeting with an outside agency to provide a new service for the boys.”

Several strands of Gyp’s work give an insight into his ethos and commitment. “‘Polmont DRIVE’ is a boot camp style course that Gyp has developed and also facilitates for the boys of Polmont,” says Geoffrey. (As Gyp explains, it is aimed at “a variety of young people who may be overweight, underweight, or have low self-esteem or mental health issues, to help support them to reach a positive destination.”)

To achieve the highest standards, Geoffrey goes on, “Gyp has formed a close relationship with the NHS.” It’s “a flexible and fun way” to “maximise opportunities for outside agencies to attend to, and maximise the experience for, our boys – the last group of DRIVE completed a course on racism facilitated by the Scottish Football Association (SFA) and again, it was Gyp who used his contacts to make this happen.” Participants get a Young Achievement Award as part of Polmont’s partnership with Barnardo’s.

Also in partnership with Barnado’s, Gyp “has been the driving force behind several successful Duke of Edinburgh (DoE) groups in recent years,” says Geoffrey, adding, “For this, Gyp has had to give up a lot of his own time for training as well as making a huge commitment to the course.”

Melanie Bowie, Polmont’s Human Resources Business Partner and Butler Trust Local Champion, gives the background. “Due to the physical constraints that a prison establishment naturally presents, some of the core components required of the DoE awards, namely the need to spend time under canvas, were difficult to accomplish resulting in our young men being unable to complete the full award.” Gyp, keen to provide the young men with the full DoE experience, identified a site within HMP Dumfries where camping would be possible and engaged with the DoE assessors for this proposal to be assessed as acceptable which took place.” 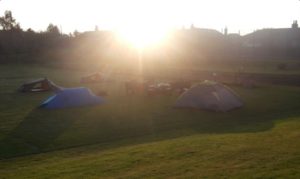 Gyp has now overseen dozens of young men achieving a DoE award, with many more completing part of them (often due to being moved on). Not only is Polmont the only Scottish institution offering the Duke of Edinburgh Award Scheme, but Gyp is justly “extremely proud” to report, that “as of the start of October 2016 the establishment was awarded a Duke of Edinburgh’s Award license [allowing Polmont] to verify participants work.”

Fundraising is another theme. Melanie gives one example: “Gyp arranged for one of our population to complete a marathon while in custody and aided in the training regime to ensure the young man remained motivated and to reduce the risk of injury.” Working with Youthwork, they raised £800, “mainly from our population”, and this was donated to CEA [Committed to Ending Abuse, formerly Falkirk District Women’s Aid], “again strengthening a bond with another agency that has helped to finance summer fun days for the children of abused women.”

Another powerful project Gyp and Polmont are involved in is Redburn School, which caters for a variety of special needs, with whom they hold two events a year. A group of young men, acting as ambassadors for HMYOI Polmont, are given responsibility for the planning of each event, generating ideas and themes for the day and facilitating the day itself. Feedback from the children’s families and the school itself is incredibly positive, as is the impact it makes on the young men involved. And although “Gyp is not an individual who seeks the limelight, he comperes the day, working closely with the children, who often cannot be separated from him at the end of the day.”

Melanie says, “I have never had the experience of working with such a motivated and caring officer… he is an extremely enthusiastic and energetic individual who clearly loves coming to work [and has] an ability to ‘truly tune in’ to what motivates the young men. Respected by colleagues, management and the young men for his professionalism, Gyp is recognised as an inspiration for the work he is doing… and for the genuine care for the young men in Polmont.”

Barnardo’s Youth Worker Kim Douglas says Gyp “has been invaluable in supporting me – we have established a very good working relationship due to his openness and approachability, which is evident in the increasing numbers of young people who have gained their DoE Awards due to the joint work we do.”

Ken*, an offender, says “Gyp is extremely proactive… his professionalism and energy rubs off on those around him as he is always encouraging young people to get involved in as many different activities as possible thus bettering their lives. Gyp has encouraged me to participate in the DoE award and the addiction recovery walk. In addition to this he also gave me the confidence to referee and ‘officiate’ in the Monro 4 football tournament which is no small feat as until recently it was a sport I knew nothing about.”

Another young offender, Dave*, adds, “I have completed the DoE bronze & silver awards in which Gyp helped me complete. He was the main organiser behind the camping trips and he made sure we were well prepared and even came to work on his days off to make sure we were ready… Gyp was also behind one of the best days of my life as he helped organise the DoE boys to play Dumfries at football and he organised for us to go to Dumfries and help cook for a local Alzheimer group. Gyp promotes positive energy every day.”

Polmont’s Governor, Sue Brookes, calls Gyp “an extremely capable and compassionate officer and Physical Exercise Instructor,” and notes, “Years before Polmont embarked on ‘Creating a Learning Environment’, Gyp was ahead of the game, volunteering to take part in young person specific staff training qualifications. His friendly and warm-hearted approach to young people and colleagues encourages co-operation and participation at all levels.”

Johannes himself praises the Scottish Prison Service for investing time and resources in his continuing professional development: “I have had the privilege of being selected to attend university on a part-time basis, and successfully achieved a BA in Community Education specializing in ‘Youth Studies’. I feel that this has been the catalyst and an integral part in my continual quest to achieve positive outcomes for young people in my care.”

He is particularly satisfied to witness “young men developing into adults whilst learning new skills, increasing their knowledge [and] giving them the confidence to meet the challenges of returning back to society… Irrespective of the situation or activity my aim is to make a difference every day. Every young person is unique and I try and cultivate a safe and fun environment and view any conversation with a young person as a learning opportunity.”

We finish with a wonderful quote, from a young offender with no previous academic achievements, describing what the Duke of Edinburgh Award at Polmont meant to him: “I learned that you can push yourself. I didn’t think that I’d be able to do it but after I completed it I thought I could complete anything.