AWARD WINNER 2015-16: Hannah is granted an Award for her outstanding contribution to equality and diversity in her role as Diversity Officer at Essex CRC, taking an “already impressive effort” and giving it what her nominator called “the Hannah treatment” – driving through improvements in policy and practice, building links with other agencies, and achieving national praise from the charity Stonewall. [This Award is sponsored by G4S Care & Justice Services.] 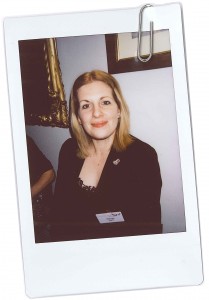 Hannah Hunt has won her Award for her nationally acknowledged work as a Diversity Officer for the Essex Community Rehabilitation Company (CRC).

Her nominator, Sam Mott of the Essex CRC Central Delivery Unit and Hannah’s line manager during this work, cites “a meteoric increase in participation, involvement and national recognition” for the organisation’s “already impressive Diversity and Equality effort.” Sam explains that Hannah took her job “by the scruff of the neck.” Although a variety of diversity groups were already in place, the LGBT (Lesbian, Gay, Bisexual, and Transgender) group in particular struggled with attendance. Hannah started by initiating an impressive partnership with Stonewall, the leading national non-government organisation in the area.

Predominantly staff-focused policies received what Sam calls “the Hannah treatment”. These were so successful that she was asked to share the Bullying and Harassment policy with Leeds United – the only football club in the Stonewall Diversity Champion programme. The Maternity, Paternity and Childcare policy she developed was shared with Stonewall itself as an example of better practice. Essex CRC went on to achieve full marks in Stonewall’s Workplace Employers Index in 2014 – an impressive result achieved again in 2015.

Hannah launched her Straight Allies booklet which produced an increase in Essex CRC staff signing up to support LGBT colleagues. Stonewall again regarded it as best practice, and the booklet has in turn been shared with the all-Probation National Equalities Group.

In 2015, Hannah’s work led to Essex CRC being recognised as a Top 100 employer as part of the Stonewall Workplace Equality Index. It’s a highly competitive accolade, as champions apply from across both public and private sectors. At 51, Essex CRC proudly came equal with The Department of Health, Hertfordshire County Council, and The Royal Navy – and scored higher than De Montfort University, The University of Birmingham, the National Audit Office, the Joseph Rowntree Foundation and Sheffield City Council, among others. As Sam notes, “No mean feat, given that this is only our second year of application.”

Luise Usiskin, Stonewall’s Account Manager, says that “Hannah has shown outstanding professionalism in everything she has done, particularly in the production of Essex CRC’s excellent Straight Allies guidance, and their best practice Bullying and Harassment policy, which I have shared with a number of other organisations including Leeds United FC, the Queen Elizabeth Hospital in Norfolk and City of London Police Service. She has put in a huge amount of hard work. Her diligence, intelligence and commitment to equality shines through in everything she does.” Luise goes on: “Hannah is generous in sharing best practice with other organisations and has made a real difference. I hope you are proud to have her working for you. Not every organisation is as lucky!”

Mary Archer, Chief Executive for Essex CRC, is also impressed, noting that “Hannah’s approach has been an inclusive one in all directions: departments across the CRC have joined with her to improve our already-positive approach to diversity issues. As a matter of course, our Diversity noticeboards across the county are re-filled every month with a new Diversity theme – possibly the most up-to-date noticeboards we have!”

Mary points out that “much of the groundwork was taking place while Hannah was completing her maternity leave in the first half of 2014. She had attended all the important meetings throughout her absence, and now takes her two boys along to the events she attends,” adding that “our sponsorship of the Essex Pride event in summer 2014 and its promotion in our staff newsletter was another Hannah-instigated activity along the way.”

Mary explains that Essex CRC will be “sorry to lose the whirlwind that was Hannah in the Diversity arena; she has now moved on to a manager’s role, and has already ensured we win ISO 9001 re-accreditation. She will doubtless come up with further inspiration and motivation for our staff group in other fields. And Diversity will always be a huge player in whatever work she takes on.”

Hannah’s approach to her work “is always extremely positive, with a willingness to take on difficult tasks and find new perspectives in order to achieve our aims,” says Mary, adding: “a safe pair of hands in all that she does, she is trusted by both managers and staff to produce the goods with integrity and imagination.  Her enthusiasm for whatever assignment she undertakes shines through, as does her belief in the work of the organisation and her strong contribution towards it.”

Mary Archer notes that “a tenacious search for quality of service delivery requires similar dedication and high motivation on the part of organisation’s leaders if we are to give our best to those who need it,” and explains that “Hannah plays a vital role in keeping these efforts in the forefront of our thinking.”

Hannah explains that she took on this part-time role when she returned from maternity leave, “with a fire in my belly to change the world for the better, to ensure my child could enjoy growing up in a more inclusive world.”

She explains how three main policies “were given ‘the Hannah treatment’ as our Communication Manager Lynne McKay says, which means getting the very best attention, going the extra mile and ensuring there was a clarity in the policies message.”

Proud that Stonewall asked to share one of her redesigned policies the first time, as the distribution list grew longer Hannah “realised that my passion was making a real change, not only in the Ministry of Justice but in other sectors. My dream of slowly making the world a better place was becoming a realisation.”