AWARD WINNER 2020-21: George’s Award is for his exceptional work as an Officer at HMP Dartmoor over more than 30 years. His nomination includes fulsome tributes from prisoners and peers; and to quote the Governor: “a prison full of Officer Blakes would be wholly rehabilitative, respectful, decent, procedurally just, and crammed with wellbeing.”
[This Award is supported by Seetec Justice.] 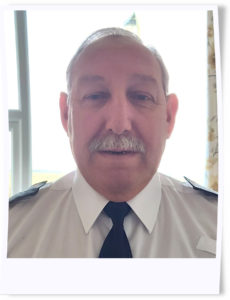 In the words of one of George’s former managers (now retired), “Dartmoor prides itself on having community spirit and George is certainly at the heart of this, modelling decency and respect in all he does.” He goes on to say, “George is highly respected by staff and prisoners, his working relationships with prisoners are second to none and his adaption to the new keyworker role is also impressive,” adding that “to George, he is just doing his job, [but] with the number of years he has now served, it is evident he has true passion and commitment, as well as enthusiasm and enjoyment for what can often be a tough ride”.

Initial Nominator, Butler Trust Local Champion and Head of Business Assurance at Dartmoor, Zoe Berry, concurs, writing that “George spends his work time immersed in our community behind the wall where he is at the forefront of embedding a rehabilitative culture, working on programmes that deal with substance misuse treatments, conflict mediation and support. He has seen many a change within the service and has some stories to tell! George works to promote procedural justice in our daily prison practices, providing a fair and transparent approach to both those in custody and our staff.”

She described how George now works “as a dialogue road map facilitator which is a non-violent form of communication for helping people explain how they feel. It allows participants to be fully heard and understood in order to find change through choice rather than enforcement. With a non-judgemental approach, George thrives in this role allowing people to have a voice, reflect on their behaviours and find peaceful solutions that address the issues or conflicts. He exudes willingness and eagerness to make changes to people’s lives and make a difference.”

She adds that “being humble, he would say this is just his job, and that treating people with respect is a natural belief. It is this modesty that allows him to continue doing what he so avidly enjoys.”

Zoe concludes by saying that George continues to be a positive role model, mentor and advisor to new officers, a recognised counsel to his peers and a respected keyworker to prisoners.”

Zoe then shared a number of testimonials by prisoners. The first wrote: “As my keyworker, George has made a positive impact on me due to his approach and manner. He is professional, supportive and approachable. He is genuine and always takes time to get to know you as an individual, helping you develop and move forward. He is non-judgemental and makes himself accessible. He is a true enabler. Prison can be an unforgiving place but I am grateful to George for his compassion, diligence and support. He is a true inspiration.”

Other prisoners added their voice: “Mr George Blake always has a smile on his face and treats everyone like human beings. He addresses us by our first names and breaks down barriers between inmates and officers”, says one, while another reports that “Mr Blake has been supportive through family and drug problems. He makes you feel at ease and gives you a sense of normality.” Another, for whom “Mr Blake” is a keyworker, added that he “has helped with a few issues and when I lost my nan. He is fair and respectful and always notices when someone is having a bad day.”

As Zoe observes pithily, “it hasn’t taken George 32 years of service to become the Officer he is – this isn’t learnt behaviour.”

HMP Dartmoor’s Governor, Bridie Oakes-Richards, notes George’s “endless enthusiasm for the Prison Officer role and his growth mind-set in enabling prisoners (and staff) to manage issues as challenges to be won rather than threats to be avoided or resisted”, and says he “role-models the very best in officers and in people, he is a true gentleman with the highest standards of behaviour for himself and he expects and receives this from others.”

Bridie also notes that while George has long service, “he is not stuck in the past and has vanguarded new initiatives such as Dialogue Road Map/Conflict Mediation and key working, using these as powerful vehicles for change,” before concluding with high praise indeed:

“A prison full of Officer George Blakes would be wholly rehabilitative, respectful, decent, procedurally just and crammed with wellbeing – which is exactly why he mentors new officers.”