AWARD WINNER 2019-20: Florence wins an Award for her exceptional jailcraft at HMP/YOI Isis; as a widely-respected mentor to her peers; and for being someone who, in the words of her Governor, “quietly and modestly does her job brilliantly, [and] exemplifies all the qualities you would wish for in an Officer”.
[This Award is sponsored by Mitie Care & Custody.] 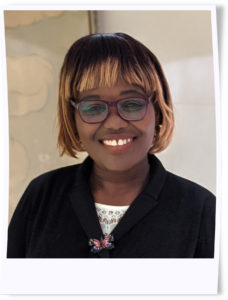 Every week, Florence Alake picks out one prisoner (who may not even know about it) to focus extra effort on. She’s reluctant to go home unless she’s happy that a vulnerable prisoner in her care is safe in their cell, and with a Listener on hand to offer support. Her outstanding gifts as an experienced Officer – and example to newer staff – are widely recognised, and have resulted in her being part of a ‘standards coaching team’. These hand-picked Officers are explicitly tasked with going into other prisons to watch and give feedback. Quietly spoken and thoughtful, her work consistently demonstrates the very highest levels of jailcraft, and its impact shines through in the testimony of colleagues and prisoners alike.

Her initial nominator, Chineme Mgbeike, Custodial Manager at Isis, explains that Florence began her career as a Prison Officer in August 2000, and spent 16 years at HMP Holloway working across all areas of the prison, in particular on the Lifer unit, the Mother & Baby unit and the unit for pregnant women. When Holloway closed in 2016, “she was loved and respected by prisoners and staff alike for her kindness, compassion and care. She was everything you could expect of a Prison Officer.”

Florence then moved onto HMP & YOI Isis and, having spent all of her career working with female prisoners, this was ‘a huge change’, says Chineme:

“She now had to work with young adult men in a prison that was often violent and with young men who could often be rude and aggressive. Instead of her team of experienced officers at Holloway Florence found herself working with lots of new, young staff in their probationary year. The prison was very short staffed when Florence arrived. Others may have been daunted and struggled to come to terms with these new circumstances but Florence flourished. Her experience was invaluable and her kindness and compassion was welcomed by young men and emulated by new staff.”

As one new staff member writes, in a thank you letter to Flo, “thanks for your patience, understanding and support. You went beyond the call of duty by being our mentor and taking time to teach and explain.” Another writes, “staff often go unrecognised, Flo is always willing to help out. She has a great attitude and pretty much parents the staff on Thames,” while a third adds, “Flo is a great Officer and an even greater friend. She is always willing to help others and has a smile on her face which is refreshing, especially on a bad day. I have learnt a lot about the role from Flo because of her extensive experience and I will always be grateful for that.”

What is exemplary about Flo, says Chineme, is that in the face of so many new staff “she did not complain but went out of her way to help, support, train and befriend… she rose to the challenge with a smile on her face.”

In the last year Flo has received at least nine formal thank you letters from prisoners – one even writing that “she has a beautiful aura!” Another says “she has taught me to be a better person by pulling me to the side and speaking to me and showing me how to stay out of trouble. I will never forget her”. There were other remarks, too, like “she is not just wing staff she is a mentor” and “I would like to see more Officers like her in higher positions as it would make a major difference in the system”. And, says Chineme, “every letter says that Flo is fair and always smiling! Flo is a great example of an Officer ‘just’ doing her ordinary job in an extraordinary way.”

Emily Thomas is both the Butler Trust Local Champion and Governor at Isis. Familiar with Florence’s work at both Holloway and Isis, she describes her “doing her job as a Prison Officer extraordinarily well for 19 years”. Emily adds that:

“Florence exemplifies all the qualities you would wish to have in an Officer. In particular over the last few years she has demonstrated her skills as a mentor to new staff and to young men at Isis. The nomination form uses the words of staff and prisoners themselves, written not for this award process but independently as part of the prison’s own recognition scheme, to articulate the extraordinary way in which Flo does her job.”

Holloway was, says Emily, “a challenging prison, and Florence was loved and respected by all her colleagues and the prisoners (I know because I was the Governor there in 2015/16!).” Isis brought another set of challenges, though:

“Isis was very short of staff, was working to an emergency regime and had just had a poor inspection. Young, adult men are more aggressive, volatile and violent than women and often far harder to talk to. I think many Officers would have really struggled with the change that occurred for Flo on transfer. It is a huge credit to Flo that she rose to the challenge.”

Emily adds that the remark most often made Flo is that “she is always smiling”. Other qualities she highlights include “real patience” when dealing with prisoners and staff, “she is always prepared to do more and go further… quiet and unassuming, she quietly and modestly does her job brilliantly. She has the respect of colleagues and prisoners alike.”

At a recent meeting to discuss the performance of all Officers on the residential units, Emily recalls, “Custodial Managers were unanimous in their praise for Flo. They identified her calmness and her control; she never shouts but can immediately restore order and her fairness means she can both praise and punish effectively.”

One letter from a prisoner that Emily particularly likes says:

“Thank you, massive thank you for coming back in and inflicting order amongst the dinner queue. You have achieved such an amazing result where these young prisoners are starting to understand manners and queue correctly. Mainly thank you Flo for doing something about it and bringing order.”

While another prisoner writes:

“These last couple of days have been most testing due to my food refusal yet Flo (and other Officers) have kept my mental health stable with their kind nature. Instead of poking at me or ridiculing my decision to refuse food they have acted so professionally and been so supportive. They would randomly come and check on me above the normal required checks. Just proves they do act on their duty of care. It’s overwhelming and makes me think I should stop just to prevent the extra work for these Officers. They need to be recognised for their grace and care.”

Emily adds that the officers who this prisoner praised (besides Flo) “were all new members of staff who had been mentored by her over the last year.” She concludes that Florence “is helping us develop an amazing group of staff… she is changing lives.”

With thanks to HMP Isis, especially Initial Nominator and Custodial Manager Chineme Mgbeike, and Butler Trust Local Champion and Governor Emily Thomas, for their contributions.