AWARD WINNER 2014-15: Now based at HMP Bullingdon, and previously at HMPs Elmley and Standford Hill, Elizabeth is granted an Award for her 25 years as a volunteer providing bereavement counselling to both prisoners and staff. According to one of the many prisoners who supported her nomination, “Elizabeth is like a shining light in the prisoner’s darkness, and she has clearly dedicated her life to help those who are lost”. [This Award is supported by Serco Home Affairs.] 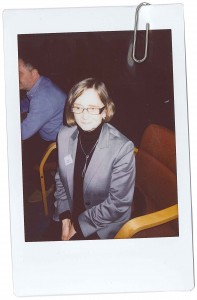 Elizabeth Shapland has spent 25 years as a volunteer providing qualified bereavement counselling to prisoners, and sometimes to staff, starting at HMP Elmley and Standford Hill, and then at HMP Bullingdon, where she freely gives around 30 hours a week of her time.

As Elizabeth points out, failing to successfully dealing with loss and grief can often trigger patterns of behaviour, for example turning to drink or drugs or simply feelings of anger, that can in turn lead to offending behaviour. Further, learning about the death of a loved one can be unusually distressing for those in a prison setting, who may or may not be able to attend a deathbed or funeral.

From gently breaking the news to helping with the detailed paperwork needed to be allowed an accompanied visit outside the prison, Elizabeth is there, and clearly highly thought of by the prisoners themselves (there’s a waiting list for her one-to-one time).

Initially trained in counselling by Cruse Bereavement Care, the quality of the impact of Elizabeth’s work is brought to life movingly in the words of two prisoners from HMP Bullingdon, quoted here in full:

“Sometimes in life one has the privilege to come into contact with someone who is very special and provides inspiration, often when one is in most in need of it. I have known Sister Elizabeth for a period of over three years…I have heard and witnessed the works she has done for prisoners [which] are amazing. Although she is very small, she is well respected and loved by all prisoners and staff there.

“I believe that for many years Elizabeth has unselfishly given up her time for all the prisoners who are in desperate need. When we [feel] alone and sad, she gives us comfort; when we [feel] lost and [in] despair, she gives us hope. She is like a shining light in the prisoner’s darkness and she has clearly dedicated her life to help those who are lost.

“Elizabeth shows compassion of such caring gentleness, such feeling towards all prisoners who have lost loved ones. Often a most tough and demanding job, always speaking sincere comforting words to prisoners who at times feel their whole world has fallen apart and lose all will and hope of anything ever getting better.”

“Elizabeth is a blessing to so many and just seeing her walk along the prison walkways brings a sense of peace. Elizabeth is an amazing human being in her work as a bereavement counsellor within Bullingdon – she is that rare jewel of a devoted worker who puts her utmost effort into carrying out her work accurately, caring, efficiently and respecting the prisoner’s human dignity when they need it most.”

Helen Clayton-Hoar, Deputy Governor at HMP Bullingdon, notes that while not formally part of her entirely voluntary role, Elizabeth has also provided informal support over significant periods of time to staff facing bereavement issues. “She is someone who clearly cares for all the individuals who live, work and visit in the prison.”

Carol Gaskin, of Reducing Reoffending at HMP Bullingdon, makes an important observation that “The incidence of mental health problems among prisoners is very high, and untimely deaths of family and friends often trigger emotional distress which can have a negative ripple effect in the prison. Many of these men never had the opportunity to properly address their grief issues and have simply bottled them up or expressed their distress in offending behaviour. Officers can be at a loss as to how to handle this.”

Elizabeth, whose work has included group and one-to-one counselling, is interested in extending the impact of her work and exploring what other good practice is out there in this charged and emotionally demanding area. Having identified that “some prisoners respond to the support better than others, and grasp how to use creativity to express and understand feelings,” she would like to explore the potential for peer support by prisoners in this work.

Ian Young, the Governor at HMP Bullingdon, sums up the cumulative impact of Elizabeth’s long and sustained commitment to volunteering her services: “There is no doubt that there will be many prisoners in addition to the ones quoted…who think of Elizabeth as someone who has been there for them at one of the lowest moments of their life.”