AWARD WINNER 2019-20: David’s Award is for his remarkable creativity and tenacity, as a Catering Manager at HMP Buckley Hall, in transforming the look, taste, and nutritional qualities, of the prison’s food – improving the men’s physical health, and their emotional well-being and behaviour, too.
[This Award is supported by Sodexo Justice Services.]

Whether exploring how enhanced diets can improve behaviour and mood, and then making real changes to longstanding food habits, or taking on an ex-prisoner as an employee, David consistently sets himself – and then delivers on – remarkable challenges. 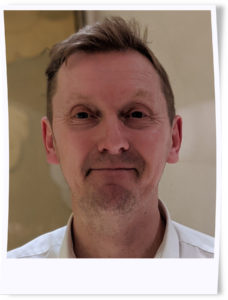 Julie Platt, Buckley Hall’s Head of Business Assurance and the initial nominator, describes how, ever since David joined HMP Buckley Hall 25 years ago as a chef, he has “always ensured that his team has exceeded the service required, often to exceptional standards.” One example is a small bakery project giving prisoners experience of different hospitality sectors. As well as increasing their knowledge of the sector’s employment opportunities, it combines practical experience of business management, working in teams, and meeting deadlines. “David is a natural motivator”, she says, who has brought “enthusiasm and drive” to this and other projects.”

“His initiative involves the entire kitchen team of staff and prisoners producing cakes, tray bakes and sweet items for the wider prisoner population to purchase… It’s proved very popular with the men and resulted in a substantial additional income stream of £52k to subsidise David’s other projects.”

Those projects include links with the local community to show prisoners that they were capable of giving back. Working with a local church, whose congregation includes volunteers running a soup kitchen in Rochdale, he started supplying them with bread rolls made by the prisoners. Another opportunity involved supplying birthday cakes to elderly residents in local sheltered accommodation.

After attending a seminar on links between food, nutrition and behaviour, David was inspired to deliver a much wider range of healthier food. He thought good food and nutrition could improve prisoners’ behaviour, mood, mental well-being, and concentration – and help them learn about healthier choices by understanding the reasons why. It’s an extraordinary project, and all self-funded, too:

“This is a huge project which involved changing the breakfast that we serve, bread consumption and water consumption. HMIP had also in the past been critical of the pre-packed breakfast option that was available in HMPPS. David enhanced this with a pre-made pot of ‘overnight’ oats, yoghurt and fruit. He also offered an alternative at lunchtime to the usual sandwich option. This consists of prepared salads, with additional grains, pulses, roasted vegetables, avocado etc. This initiative has required input from our gym staff, education provider and healthcare provider. Again, it has been David’s enthusiasm, commitment and knowledge that helped prisoners to believe and trust him and our other partner agencies buy into this ethos.

“This is a long-term project which is very exciting and the prison population are embracing it, with at least a third of prisoners choosing the healthy salad option rather than a sandwich every day for lunch. David has now expanded this to eliminate processed foods from the menu and greatly reduced the amount of fried foods. The dietary changes have meant an increase in costs (for better quality ingredients), but all of this is funded by David’s other kitchen projects, meaning no additional cost to the prison.”

Christel Ligman, Buckley Hall’s People Hub Manager and Butler Trust Local Champion, reports that “David keeps himself up to date on all the latest research regarding nutrition and how it links with well-being”, and praises their rehabilitative culture – and “David’s personal ethics” – for the way the Catering department has sought to “give back” to the community. Baking bread for the homeless and providing birthday cakes to our elderly community in care, “has greatly increased our prisoners sense of self-worth and belief in their ability to desist from crime,” she says, while also improving links and enhancing Buckley Hall’s reputation with the local community.

Calling David “a talented individual who is one of those rare gems who can see a way through the often complicated rules that HMPPS has to follow”, she adds that his enthusiasm and motivation means that “if you set him a challenge he will find a way to not only achieve, but exceed your expectations.” She describes him as “an extremely modest individual who does not always take the credit for what I know is his work. He is a real team player who brings out the best in his team through his mentoring and supportive attitude.”

Meanwhile, David’s latest goal – to reduce the amount of processed foods on the menu – has been taken up by the HMPPS Procurement team, who are looking to upgrade the contracts currently in place. “This has only been achieved by David’s relentless drive to ensure any changes that are implemented benefit all men in prison.”

Rob Knight, Buckley Hall’s Governor, is also effusive, calling David “the most inspirational person I have met in nearly 20 years of working for the Prison Service!” Rob describes how his first conversations, when taking over Buckley Hall, were around “investing in a pie making machine so that he could provide amazing quality food for a fraction of the price we were paying at that time. I was so impressed with his drive that I brought him the pie maker, since that day I have never had a single doubt that David can make any ambition into a reality!”

Rob also emphasises that David’s work “has been absolutely integral to my ambitions to improve safety and provide a truly rehabilitative environment at Buckley Hall. We are now one of the safest and most settled Cat C prisons in the country and David’s part in achieving this should not be underestimated. Getting the right foods into men, at the right times of the day, can have a huge impact on their mood and behaviour.” He adds:

“Lastly, I would mention the work David has done to convince me to take a calculated risk, and then help me achieve the successful integration of a recently release prisoner (still on licence) into our kitchens as a fully employed chef! This took courage and resilience as we had many hurdles to overcome, including convincing the prison staff that this man was no longer a prisoner but now a key carrying colleague. There is not a single negative thing I could say about David, he is exceptional and truly deserves to win the Butler Trust Award.”

David recounts the story of that ex-offender, Mohammed, in more detail, and it’s worth quoting at length:

“A prisoner who used to work in the kitchen was released after serving his sentence. He worked well in the kitchen, he was polite and hard working. He had done wrong and was punished for his wrong doing, he openly admitted this to us and said he hoped that one day he could make amends. He told us of his shame and guilt of what he had put his family through. I happened to run into him 18 months later when he was visiting another prisoner at Buckley Hall. We had a chat and I learned that he was working part time as a lorry driver, the pay was ok but the work was sporadic. It is hard, he told me, to get decent jobs at 53 with a criminal record.

“That prompted me to begin looking into how difficult it would be to employ an ex-offender in the jail he had actually served at. As it turned out it was very difficult; but not impossible. It took a year of checks, vetting, conversations at the highest level and sheer determination, but in the end, we received clearance and the next part of our journey began. [Mohammed] has now been a member of the catering team for seven months and he has been an inspiration to everyone. He wanted to make amends for his previous life but what has really happened is he has become a valued member of the team who inspires us all showing what potential we all have if we put our mind to it.”

Mohammed himself wrote a touching testimonial:

David is generous, too, in his remarks about receiving “lots of support at work from all areas and from all grades when it comes to changing and improving things with a view to contributing to the bigger picture.”

He describes himself as “a firm believer that diet and nutrition play an enormous part in helping individuals to feel better about themselves, helping concentration levels, improving behaviour and conduct and contributing to mental wellbeing.” He couples this with global policies on sustainable consumption and “forward thinking on a better use of world resources.” His sources in developing a healthy nutritious menu include “data from a variety of areas including the school healthy meals policy, government guidelines, and the white paper on sustainable consumption to name but a few.”

He describes the results as “truly staggering” and “better than I could have ever imagined.” The remarkable changes he’s made include:

“…removing processed foods, introducing healthy carbs such as quinoa, couscous and bulgur wheat, healthy breakfasts, and the reduction of bread (even though homemade) and the complete removal of fried foods on weekdays [which] has been actually embraced by the prison population.”

He adds that “We have now been approached by a number of agencies to gather data over the next year to see what actual benefits can be achieved by simply changing the diet. Public Health England have just begun a yearlong exercise with us to look at those very things, this is a truly an exciting time.”

“The Governor in an open letter to staff at Buckley Hall, and in his numerous Governor meetings, has stated that there has been a reduced level of violence at Buckley Hall and the diet is a contributing factor. If this can be proven after a year then we can truly make a bigger difference than I ever imagined.”