AWARD WINNER 2020-21: Described by the Governor as “a real asset” and “one of the best”, Daljinder is granted an Award for all-round excellence as an Officer at HMP Woodhill, in particular for the encouragement and support offered to his colleagues, and his skill in managing especially challenging and vulnerable prisoners.
[This Award is supported by the Prison Officers Association.] 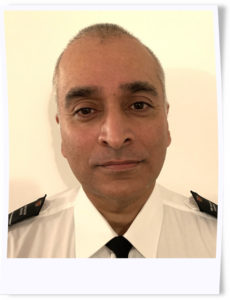 Initial Nominator Michael Spellman, Head of Safety Equalities and Segregation at HMP/YOI Woodhill, offers a profile of Daljinder’s many qualities, noting that he has “consistently displayed added resilience whilst working under pressure”. He praises Daljinder’s “ability to talk openly and honestly to anybody, regardless of their race, religion or gender”, noting that he has worked with “some of our most vulnerable men in our care but also some of the most dangerous within the CSC [Close Supervision Centre].”

Like other colleagues, he notes “Daljinder’s professionalism at de-escalating incidents, while ensuring boundaries are explained, and assisting the men in abiding by the rules and preparing them to re-integrate back onto normal location”. Michael adds that he has witnessed Daljinder “subjected to racial abuse by prisoners within segregation” but “this never affected his work effort in seeing the best in individuals and helping them to address negative behaviours, remaining professional at all times and continuing to build positive relationships.”

A “highly thought of and experienced member of staff”, Daljinder “commands the respect of all colleagues and prisoners alike that he comes into contact with on a daily basis” says Michael. He adds that Daljinder played “a key role in the building of the function into a national award-winning team when the Early Days in Custody Team won prison service Team of the Year in 2018.”

He says Daljinder “shined” in his work around Family Visits, “as a positive role model to not only the prisoners but the staff working alongside him,” with his “calm and considerate attitude and approach when dealing with all prisoners”, and says he has been able “to detach himself from ,events which are often disturbing and traumatic, to concentrate and focus on individual’s needs and assist them in making informed choices and decisions to reduce the risk to both themselves and others.”

Butler Trust Local Champion and Woodhill’s Business Administrator Bianca Watts shared testimonials from Daljinder’s colleagues. Prison Officer Wayne Browne calls him “a joy to work with and a great team player”, while Custodial Manager Martin Yardley says “he goes above and beyond with his duties, willing to help and guide others through their career with his knowledge, experience and commitment. He is a great asset to the team here in the Segregation Unit.”

Katy White, Supervising Officer, agrees, calling Daljinder “a great team player who always has your back and when on shift does not stop working hard” who is “always willing to help others out. Well done Officer Sangha, you deserve it!!”

Rabia Butt, Administrator, adds “I always found him to be very funny, he was lovely to work with. He made me feel very welcome when I joined the Separation Centre. Dal would ensure there was a positive environment in the workplace. He was very enthusiastic and would enjoy taking park in the team well-being sessions.”

Bianca adds further detail to Michael’s profile, explaining that their “nomination for Dal is for his outstanding work ethic. He will always go out of his way to complete his job to the best of his ability. He has worked with some very difficult offenders, yet he manages to keep a clear professional boundary even when facing racial abuse himself as an Asian officer, and will always look to find the cause of this aggression to find a solution.”

She adds that “Dal is deeply respected by those he works with and is able to build a positive relationship with his colleagues as well as the men in his care,” and that “he prides himself on always making others laugh, he never wants to see anyone upset. It is rare to see Dal without a smile on his face, and he will always try to make the best of the situation.”

She concludes by saying that Daljinder “is dedicated to helping others: adaptable and focused , he leads with an integrity that sets a high standard for other colleagues of all grades to follow. He is highly thought of at Woodhill and much wider.”

“I have huge respect for Dal – he has a confident quietness that allows you to engage openly about often very difficult and sensitive subjects, drawing on his years of experience. On our local POA committee, he speaks up for those in need of support, and equally offers me wise counsel as Governor, which on more than one occasion has led to me changing my actions or rethinking a decision or opinion. He is a huge asset to us, and I would give a seat to Dal at any table I had a position on. In the current climate, he has courageously spoken about racism, about inclusion, he has led compassionately and generously alongside colleagues, he has a measured approach that doesn’t easily get riled, he speaks truth to power with a gentle directness that makes you wonder why you hadn’t realised that yourself.  We have many good officers. Daljinder Sangha is one of the very best.”

Daljinder himself thinks his “resilience and ability to maintain high standards” help him to be a valued member of the team. “I have the confidence to have robust conversations with men who have at times shown no regard for their actions, and have subsequently been beneficial in supporting them in their assessment resulting in their selection for more specifically supportive units.” He believes his strongest skill is an ability “to empathise with the men and help lift their spirits, as prison can be a daunting experience for first time prisoners. My ability to support men with some of the simplest aspects of prison life was the most rewarding for me, as from my own experience I have witnessed how a simple daily task that is taken for granted on the outside can be difficult to achieve within a prison environment.”

He also shares “one of my most profound events during my career” – the moving support he offered a man going through a very difficult life event. “Prior to the visit taking place I had been made aware that this visit was going to be the last physical contact this man would have with his baby daughter due to social services taking over legal guardianship. This was a highly emotional time and I sought out ways to provide comfort to the prisoner, including organising with security so he could have photos of this last visit. Following the visit, I enabled the man to be able to spend some time alone to digest and accept the situation, and provided peer support for a period of time with a suitable prisoner.”

He concludes, simply but powerfully, “I’m incredibly proud of the work I do and strive to make a difference throughout my establishment.”