AWARD WINNER 2021-22: Chris is granted an Award for all-round excellence as a Prison Officer at HMP/YOI Isis, where he is widely respected by colleagues and prisoners alike, for his positive attitude, outstanding jailcraft, and “Zen-like calm” – in the words of the Governor, Chris “embodies all that is good about Prison Officers”.
[This Award is supported by G4S Care & Justice Services.] 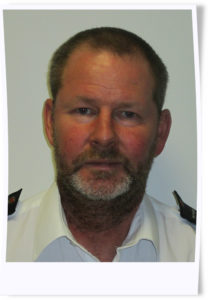 ‘One of the best examples of a prison officer anywhere’

Next year, Chris MacInnes will have spent twenty years as a highly regarded Prison Officer, half of them at HMP/YOI Isis – where his colleagues clearly can’t get enough of him. Yet Chris is so unassuming, says Line Manager Nandini Handa, that having “unanimously” decided to award him their 2019 Spirit of Isis Award, they had to hatch “a cunning plan” to get him to the ceremony “because he always volunteers to cover patrol!” They then “had to come up with a prize that only he would like so that he didn’t try to give it away to someone else.” His Governor, Emily Thomas, shares in the universal acclaim for Chris, calling him “a template for what a good officer should be.”

Nandini sums up why Chris is so valued throughout the prison:

“Chris never complains, always volunteers, stays late, comes in early and always works hard. He is the most cross-deployed officer in Isis because he is so easy going, picking up his newspaper and tin of mackerel and going to wherever he is sent.  He can work anywhere in the prison, knows the regime on every wing and his aura of calm and good sense mean he has excellent relationships with all staff and prisoners.”

His current Line Manager, says Nandini, calls Chris’s work attitude “faultless”, adding that he is so calm and collected, in fact, “that the famous story about Chris is of him being assaulted while at Wandsworth when a prisoner punched him to the floor. Chris simply got up and continued to lock up his landing.”

As if that weren’t enough, Chris has also “almost single-handedly maintained the partnership with the Samaritans, leading on training and support for Listeners [an award-winning peer-support scheme started by Kathy Biggar]. “He has given up his lunch times for seven years to make sure Listener support meetings happen regularly,” Nandini explains. “He also recruits, vets and helps train new Listeners, organises their end-of-course celebration event, and goes to see the Listeners regularly on the house blocks, too, to extend his support.” On top of that, she adds, “he is a great Officer to work with”.

Emily says Isis had to filter down the testimonials as there were so many. Here is a small sample of those she thinks describe Chris best: “Good humour, diligent, hard work and unfussy… He can always be relied upon”; “phenomenal levels of patience when dealing with difficult prisoners”; “friendly and extremely helpful”; “consistently professional wherever he happens to be doing his duties (which often asks him to be the most flexible and durable a human can be)”; “always has time for you”; “a great sense of humour which can make your day”; “working with Chris takes away the stress of the day.”

Regarding his support of prisoners, everyone Nandini spoke to “had positive things to say” and she knows “for definite” that he “always has their best interests at heart.” Emily adds that in the most difficult situations he maintains “an almost Zen-like calm” which gives newer staff confidence, too. She notes that “one of the things we say about great prison officers is that they never tell prisoners they will do something and then not do it. Chris is that prison officer. He recognises the importance of sorting out the little things and makes sure they get done.” For Emily, “Chris embodies all that is good about prison officers and should be recognised because otherwise their work remains hidden.”

Chris adds an interesting insight into his personality, presence, and sheer strength of character as a long-serving officer. A decade ago, knowing full well how demanding being a Prison Officer can be, he decided to work on his physical and mental strength by taking up cycling to and from work, in all weathers, come what may. He still does it, too, adding that:

“It toughened me physically as well as mentally. It taught me to be more resilient. I became fitter and more able to cope with the prisoners’ challenging behaviours. I developed more patience with myself and others and this enhanced my self- esteem. I became more forbearing and dealt with everyone with compassion regardless of whether they were prisoners or staff.”

It shows – as does his integrity, sense of duty, and what he calls his “old school values”. All of which, and much else besides, clearly shines through to all those who enjoy the benefit of what he does, and has done, so unfailingly, and for so long.