COMMENDEE 2014-15: Bob was nominated for the diverse range of faith-related provision he has established at HMP Addiewell and is Commended for, amongst other things, his “almost incomparable” level of commitment and capacity for work. 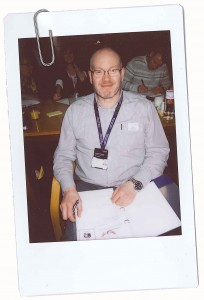 The Reverend Bob Paterson, a Faith Services Team Leader at HMP Addiewell, which is operated for the Scottish Prison Service by Sodexo Justice Services, has received praise from a wide range of ex-prisoners, official visitors, and colleagues for his commitment to providing a diverse and accessible range of faith-related provision since he joined in 2009, shortly after the prison opened.

A former policeman, Bob “is one of the very few examples I have seen of someone whose personal, professional and spiritual aspects are so fully aligned,” says Tony Simpson, Acting Director at HMP Addiewell. “He has a capacity for work and commitment”, continues Tony, “which is almost incomparable.”

Tony adds that “on a wider level, I have found Bob to be an invaluable team member. He successfully manages the “razor’s edge” of relationship management across all stakeholder groups by simply being totally transparent, deeply genuine, risk aware and fully focused on the needs of the individual.”

A recent example of Bob’s work going “above and beyond” has been his encouragement of ex-offenders to share their experiences and successes through faith related interventions within the prison. Bob has worked with ex-offenders to build their confidence and capabilities so that they could in turn share with serving prisoners their own stories, demonstrating that “you can change your life for the better, and educate those in custody on how best to do this.”

Angela Halliday, Acting Deputy Director at HMP Addiewell, notes Bob’s “personal commitment to encouraging offenders to lead crime free lives; realize they have an identity, one that is not as an offender but as a contributing citizen and who has something to offer to their family, friends and community.” She also cites his ability to bring a “new perspective to the life events of prisoners and their families” and to enrich “the role and knowledge of prison staff”, which in turn enhances the relationships between staff and prisoners. Angela adds that this, in turn, helps “the interaction our prison staff has with families and communities.”

The extent and range of his impact on prisoners, ex-offenders and the wider faith communities is captured by numerous recommendations and expressions of gratitude for his work. One ex-prisoner, John, said “I would like to thank you for helping my wife and kids. It’s been a long time since someone has been so kind to me and my family.”

Another ex-offender, Sameer, calls Bob “a really good person” who “genuinely cares for us all” and notes that while Bob “doesn’t need to go out of [his] way to assist us”, he does. Mr. Sajid Mehmood Qazi, who is the Community Welfare Counsellor at the Consulate General of Pakistan, is emphatic in his praise, too:

“I must put it on record that I have visited 8 prisons in England and 4 in Scotland so far. I have found HMP Addiewell as the best prison as far as the cordial environment and the extra ordinary services being provided to inmates. It goes without saying that such highest excellence is achieved primarily because of inspirational leadership and dedicated individuals like Bob Paterson.”

The impact of such support is well captured in the simple but heartfelt words of another ex-prisoner, Gerry, who says he can’t thank Bob enough “for being there for me when I needed someone to talk to.”