COMMENDEE 2015-16: Belinda, a Custodial Manager at HMP Hewell, receives a Commendation for the dedication, compassion and skill she shows in all aspects of her work, towards prisoners, her colleagues and the wider community. 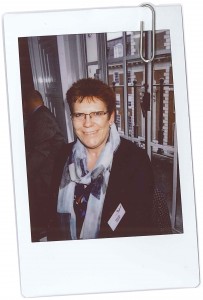 Belinda Garratt is a Custodial Manager at HMP Hewell, and her nominator, Activities and Industries Manager Merv Ellis, describes her “extraordinary gift of wanting to improve everyone’s lives – prisoners, staff and the community.” Belinda – known as ‘Bins’ to colleagues – has been in the prison service 27 years and, Merv adds, “has great compassion for all.”

He describes Bins as “passionate about her work doing voluntary and community projects”. Among many initiatives, he picks out “a scheme whereby prisoners would go out and work in the local community especially in deprived areas and assist with those that are vulnerable (elderly and disabled) and carry out tasks and roles that they would be unable to complete, such as painting, gardening and general duties.” He continues, “Another project that Bins was integral in setting up was the introduction of the ‘Hearing dog scheme’… an inspirational project that reaped dividends and promoted the prisoners and prison in a positive manner and also provided trained dogs for people with limited/no hearing.” Prisoners were given training in managing and handling the dogs – which lived with the prisoners for a year – and were then were taken to live with people with disabilities. Belinda said “this was a success story and all the dogs trained successfully passed and were re-homed.”

Merv adds that “Bins was also the driving factor in turning around waste land in a local pond in a very poor part of Redditch. The pond was basically turned into a dumping pit and sewer: Bins was instrumental in completing risk assessments and setting this project up and getting prisoners working there; this then transformed the area into a wonderful and beautiful scenic area making the community extremely proud and somewhere they could visit and spend quality time.”

Describing Bins as “absolutely driven to deliver”, Merv notes that “her work getting prisoners into employment allowed HMP Hewell to win the Outstanding Employer Engagement category at the Second Annual TES Further Education Awards.” The awards judge noted “the one way to stop recidivism is to get people into work”, describing this work as “simply fantastic.” Jacqueline says Bins “has been integral to setting up the Resettlement Fairs whereby up to 52 different agencies attend, giving prisoners the opportunity to seek the support they need on release.”

The list goes on, with Merv explaining that “Bins also manages the peer support workers, which was an innovative scheme in getting them trained and delivering services for all of the Pathways [from] induction to running the pre-release course” which “has been recognised by HMIP as good practice.”

“Bins has also assisted in getting the outside community into Hewell through events such as a Music in Prison project, speakers in criminology, motivational speakers, Geese Theatre and other support groups and wellbeing groups which improve the prisoner’s wellbeing, self-esteem and confidence, connecting them not just academically but emotionally.”

Butler Trust Local Champion Jacqueline Quirke, Head of Reducing Reoffending at Hewell, says “Bins is absolutely driven to deliver.” She joined the Prison Service 27 years ago, and, says Jacqueline, “has never lost her enthusiasm or drive to make a difference for those prisoners in her care. She still maintains her high standards and always goes out of her way for staff and prisoners.” Jacqueline adds that “Bins undertakes a lot of work in her own time and generously devotes herself to worthy causes: it is never just a job, it is about giving and caring, and she cares about everyone – prisoners, community and the environment.”

Noting that “some of our ex-offenders are now senior managers within”, Jacqueline says that it is thanks to Bins making these [employer] connections that HMP Hewell “has helped offenders into sustainable employment on release, dramatically reducing their chances of reoffending.”

Jacqueline says “Bins is inspirational in taking forward projects and her enthusiasm and drive make projects come to life and happen. She worked tirelessly with prisoners to help them better themselves in the employment market… Bins encouraged one prisoner into going self-employed and he set up his own business whilst still in prison, he is now running a successful company and employs ex-offenders giving them the same support that he received… He credits his success in running a business and staying out of prison to Bins and said ‘she believed in me and I just couldn’t let her down and wanted to make her proud’.” Committed to ensuring “every contact she has with every prisoner is positive, she truly leaves a mark on everyone that makes them want to change for the better.”

In addition to accolades from the MP for Redditch and many others, one result of Bins’ work, explains Jacqueline, is “there are actually more members of the community wanting to work with Hewell than at present we can provide prisoners.”

Another project she is currently working on with offenders is 121maths “which provides outreach work for prisoners outside a classroom environment using trained mentors giving them the confidence to learn and hopefully go back into education.” Merv reports that 121maths’ Director, John Sidwell, had this comment on Bins and the Team: “what an inspiration,” adding: “she has a fantastic can-do attitude and is a pleasure to work with.”

Adam*, a prisoner, recently had this to say: “Every family should have a Bins and then people wouldn’t come to jail – she makes such a difference to people’s lives by showing them she cares and giving them hope.” Jacqueline adds that “Bins is truly a wonderful person who genuinely cares about everyone and is a pleasure to know,” describing her as “a wonderful ambassador for the Prison service.”

Hewell’s Governor, Nigel Atkinson, concurs, explaining that “in nominating Belinda Garrett I am acknowledging her both as a professional colleague but also as someone who truly demonstrates day in day out compassion, care and empathy. She is someone that always has time for others; she is able to listen, to mentor and to guide as well as, if necessary, take a firmer line. However if she does take the firmer line she has the rare ability to do that in a way that doesn’t cause hurt or animosity. Belinda is someone who is modest, so at times when she is praised she becomes embarrassed or self conscious. This in many ways typifies Belinda, she is not someone that seeks to do things to gain praise or glory, instead she does things because she genuinely cares for others. She does not necessarily in her own opinion do anything extraordinary, she just does her job. But what a great job she does and that is the reason for nominating her: she is someone who absolutely deserves recognition for being an outstanding civil servant and human being.”

Belinda herself says, “I have always been passionate about helping others and making them realise their full potential and feel blessed that I have been able to give people the opportunity they needed.”

Belinda gives a touching account of the Music in Prison project, where prisoners are able to learn to play musical instruments and read music, which “culminated in a live production, with over 90 prisoners in the audience, after just a week in training. Some of the men involved in this had mental health issues and were not very good at communicating; this helped them find avenues to communicate and improved tenfold their confidence and self belief. I was very proud to see them give their performance knowing the journey they had been on both emotionally and spiritually. The difference it made to the prisoners was tremendous and, for some, it was the first time they had ever received any recognition.”

She says that “by working with offenders and showing them compassion, decency and kindness, it allows me to get to know them and they respond in a very positive manner,” adding “I am passionate about giving prisoners hope and strengthen their protective factors such as building a framework with their families.”

She describes one of the prisoners she assisted who now runs his own haulage company and “takes on ex-offenders on release, giving them real opportunities” while “another is now running his own laundry business which we have helped facilitate.” Another passion is “promoting family visits…. I strive to improve the way in which this is carried out to provide an informal, fun and interactive day. We hold this in the gymnasium with the families team. They can play football, sit on bean bags and forget for 6 hours that they are in a prison.”

Her current focus is “to develop a wellbeing package for all”, and she is keen to bring back prisoners “that have made great progress in the community to talk to others about how they coped with the transition and offer advice to underpin each individual journey” while “also identifying the impact that staff had on them and how powerful that can be” – an impact that Belinda herself amply demonstrates.

[* Prisoners names have been changed to protect their identity]