COMMENDEE 2014-15: Andy is granted a Commendation for his “exceptional leadership and resilience” as Deputy Governor at HMP Thorn Cross, and for the energy and enthusiasm he has retained over more than three decades in the Service. 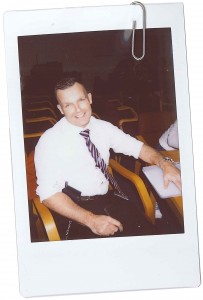 Andy Fletcher is the renowned Deputy Governor of HMP Thorn Cross. The nomination of a senior manager for recognition by the Butler Trust is unusual in and of itself. That the nomination comes from his own Governor, Pia Sinha, speaks for itself. Pia hopes her nomination and endorsement expresses “just how much regard Thorn Cross has for Andy.”

The reason such nominations are rare is the presumption that there is automatically a greater burden of responsibility at senior management levels – to exceed that standard to the point of being nominated is therefore notable.

Pia points out that, in over three decades of service, and in particular as Deputy Governor at Thorn Cross for the past five years, Andy has seen a great deal of change which he has met with characteristic passion, enthusiasm, and a wealth of smiles. Recent years have seen multiple Governors at Thorn Cross and Andy, says Pia, “has been the glue that has kept the place together through thick and thin during those years.”

She cites his “exceptional leadership and resilience”, and emphasises that, in this case, “exceptional” is the right word. “He has a way of speaking and telling the truth that makes people smile and go the extra mile for him,” Pia says, “He oozes integrity and generosity of spirit and all in a uniquely self-effacing way.”

“This work rate, energy, enthusiasm and loyalty have earned him the respect of his peers and his Governors,” she adds. “Andy is an incredibly humble person who never ever considers his needs before others – he will be the first to volunteer, he always leads by example and he never says ‘no’ to anyone who asks him for help.

“He provides mentoring and coaching to managers and despite the loading of his role is your ‘go to guy’ for getting even the toughest projects done and delivered on time. You will never see Andy give himself an advantage because of his position and never hear him complain about the demands that are put upon him. In many ways, Andy is the epitome of a moral leader.”

Andy’s smiling attitude is now famous throughout the Northwest – one of his catchphrases is ‘keep smiling.’ His enthusiasm is infectious and, as Pia notes, after 31 years in service to still be “full of energy, goodwill, humour, diligence and most importantly uncynical is truly commendable.”

Andy himself reckons he still has the same enthusiasm he had on his very first day, and cites his parents for giving him the values which underpin his work: “work hard, manners and politeness, happiness and honesty and being open-minded to other people’s beliefs and feelings. I have displayed these values throughout my service to everyone; staff, prisoners, partners and visitors. I like to go the extra mile in all facets of my work. Basically, I love my job, the diverse situations, the challenges, but to be fair it is who I am and I am no different at home.”

“We are all extremely busy now and the job is harder but that just means we need to help more,” he continues. “I am very proud of Thorn Cross; it is a community for everyone here and I just help contribute towards that.”

Andy will be leaving during the next two years and feels passionately that it is important to leave a legacy. To that end he is already looking to develop talent in the workforce at all grades. “I feel it is very important to pass on my experiences onto staff to ensure the continued success of Thorn Cross. One thing is guaranteed, although I will be sad when I leave, I will still be smiling as I have done continuously whilst in the Prison Service!”