AWARD WINNER 2021-22: Andrew wins an Award, as an Officer at HMP/YOI Woodhill, for his diligence, decency, and unwavering positivity; for his outstanding de-escalation skills with prisoners, and support and encouragement of colleagues; and for producing a guide for new staff which is now being taken up elsewhere.
[This Award is supported by Mitie Care & Custody.] 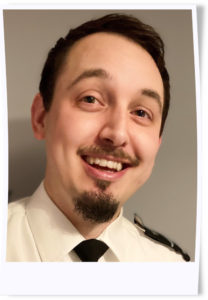 Andrew received no less than four separate nominations for an Award – including from colleagues, and one (jointly) from the entire group of Prison Mediators.

Christina Browne came to Woodhill at the same time as Andrew. But he was a POELT, there for Prison Officer Entry Level Training and she an experienced officer who had transferred in. “In all honesty I thought he was going to struggle,” says Christina. “In my mind, he seemed too nice to be a Prison Officer. But it was clear within weeks that “he was going to be a ‘new breed’ of Prison Officer: in the induction, every part of Andrew’s body language let you know he was listening. He actively took part in everything, asked really important questions no one else would, and clearly wanted to be here. Andrew was always fully focused and forward thinking.” As she explains:

“Andrew has a real skill that can often go unnoticed at work. His ability to communicate and, importantly, to listen, is remarkable. Andrew is calm in difficult situations, and has been assaulted and hurt at work, but hasn’t reacted with anger. He actively seeks out conflict resolution which is a rare trait as it is easier to sweep things under the carpet. Andrew talks to everyone like they are people, that no prisoner is better than another Officer and treats all prisoners with integrity and morals. I truly believe Andrew provides a light to prisoners.”

Governor Nicola Marfleet explains that in a year that saw Woodhill “enduring reconfiguration, COVID, the highest (petty) violence, high turnover of staff – and 130 staff on our team who ONLY know Woodhill during COVID – Andrew has SHONE.” Not least by making everyone’s life better by creating a guide for new staff on “things I wish I knew when I first started”. “Insightful, full of advice about the job as well as coping with the mental stress of the role, it uses layman’s terms about how to do the role, has photos of how to fill out evidence bags or place a prisoner on report, and fits into your pocket for you to carry.” So far 300 copies so far have been given out to staff, she says: “new and old!”

“Quick to deescalate worked-up prisoners”, Andrew has taken a leading role in training mediators (both prisoners and staff) to talk through conflict and reduce violence. “A team player, he always has his peer’s safety at the heart of his work,” adds Nicola, calling him “the definition of the modern-day Prison Officer. Respectful, kind, strong-minded, knowledgeable and humane, he treats people with dignity.” She concludes by saying he’s made Woodhill safer and inspired real change as a “really, really good Prison Officer – Andrew Blackmore is something rare to find.”

His colleague Janet Edwards shared more testimonials, starting with his Line Manager, Demi McDiarmid, who says Andrew acts “with great integrity and uses his skills to work at an exceptionally high professional standard” while bringing “dedication and passion to making Woodhill safer”, including organising ‘the violence summit’, “a hugely successful week-long event that improved relationships throughout the prison.” The safety team, he adds, “are extremely proud to have Andrew as one of our team mates.”

Another colleague on the Safer Prison Team, Ann Taylor, says “Andrew puts his heart and soul into his work from the minute his shift begins” and calls him “an absolute pleasure to work with.” Woodhill’s Violence Reduction Officer, Mick Brigginshaw, also a Butler Trust winner, says: “What an impact this man has had! A man who cares and is conscientious, treating all with decency and respect, giving clear and precise answers… a true inspiration” Meanwhile prisoners also gave him “glowing reports”.

Nicola points out that Andrew’s work on mediation, and as a trained mediator himself, “is transforming culture, helping staff to see the value of sitting down for mediation with prisoners.” She adds that he is also “polite, professional, humble, kind, hardworking, a solution seeker, well-informed –the kind of officer you are relieved to see on shift alongside you!”

Andrew himself says he joined the prison service “to make a difference.” He clearly has already – and looks to keep doing so for some while yet.