COMMENDEE 2014-15: Amy receives a Commendation for her tireless, inspirational and unwavering work to transform the lives of challenging and vulnerable female prisoners at HMP Holloway. [This Commendation is supported by the Wates Foundation.] 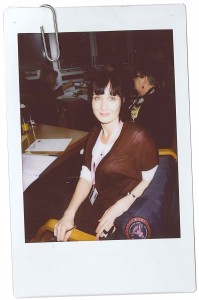 Amy Dixon, as Head of Residence and Safety at HMP and YOI Holloway, has transformed the lives not only of many often difficult and vulnerable women prisoners, but also those of the staff charged with their care.

Her extraordinary devotion to improving lives is reflected in a remark by John Attard, Head of Corporate Services at HMP Holloway, who lists a series of qualities that she has shown during her lead role on Safer Custody over three years. From the outset, says John, Amy’s approach has been “tireless, detailed, committed, consistent, passionate, caring, inspirational and, most importantly, unwavering.” He calls Amy “a shining example and an inspiration to all.”

Amy herself cites a range of the challenging problems faced by many of the women in HMP Holloway, and they make for sobering reading. They include women with profound learning disabilities (the subject of one of last year’s Butler Trust Workshops). One woman, for instance, was unable to dress or toilet without assistance. Other examples include acutely psychotic women, women with brain injury, women with terminal physical illness, and women exhibiting high levels of violence, abuse, or other anti-social behaviour. The cumulative impact can be deleterious for staff morale, who could easily, as Amy puts it, end up with ‘“feelings of doom and questions like “What on earth can we do?”’

Amy’s approach has been to tackle these enormously complex problems with an incredibly impressive array of responses, brigading multiple levels of expertise – from Mental Health and Primary Care services to Drug/Alcohol intervention workers and GPs – in a ‘Complex Committee’, whose work informs and supports the new “zero-tolerance” context that Amy initiated – all of which is embedded in a set of profoundly felt values involving decency “with humanity and respect.”

It is surely indicative that Amy, while proud of the many improvements she has helped deliver in HMP Holloway, places a special emphasis on “the seemingly limitless potential and ability of the staff and our women” that enabled her to create an entirely changed atmosphere – a community that, in her words, “not only is safer – it feels safer.”

Amy’s ethos involves sending strong messages to prisoners and staff alike of “care, decency, defensibility, safety and respect”. Underpinning these values is, in the modern prison sector, a great deal of often unheralded and frequently highly detailed work, bringing together often exhaustive levels of information and then sharing them across many different functions to ensure they are acted upon.

As John points out, many times staff can be left, after dealing with consistently difficult cases, which may involve extreme self-harm or violence, feeling “frustrated and exhausted”. A significant part of Amy’s success has been to train and engage staff, provide an enhanced level of response based on often complex cases, and give a sense that progress and change is possible, even in exceptionally difficult circumstances.

A recent report from HMCIP acknowledged the turnaround story Amy has been instrumental in accomplishing. As well as a decrease in violent incidents and self-harm, the Inspectorate were impressed to see work “far better than they normally see”. Their report noted “impressive developments in safety”, “remarkable care” for the women in HMP Holloway’s Segregation unit, and recommended Amy’s Timeline initiative – which identifies early ‘minor’ issues before they escalate – as an example, says Governing Governor Julia Killick, of good practice to be replicated throughout the Prison Estate. Julia notes that HMP Holloway offers “the most comprehensive and well respected care planning system, such that Holloway is recognised as a national centre of excellence.”

The result, as Amy says, is that “Women at Holloway, including the most vulnerable, are held safely, decently, with humanity and respect and are effectively safeguarded.”