COMMENDEE 2015-16: Allan, from the Wise Group, is Commended for his work, drawing on personal experience, in supporting offenders with complex needs and helping to prevent knife crime in South Lanarkshire. 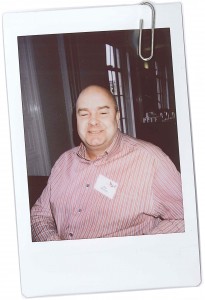 Allan McGinley is Commended for his work in Scotland with The Wise Group, a social enterprise, as both a life coach and mentor as part of Routes out of Prison (RooP), as well as his work with schoolchildren for the No Knives Better Lives initiative.

His co-nominators, Chief Executive Laurie Russell and Head of Service for Community Justice Fiona Benton, start by giving some of the background to the work: “Allan joined the Wise Group in March 2006 as a life coach on a new project, Routes out of Prison (RooP), funded by the Scottish Government to support innovative ways of supporting people with multiple and complex needs. It was developed in partnership with SPS [the Scottish Prison Service] as a unique opportunity for ex-offenders to become full time paid life coaches and use their personal life experience positively to influence and support people leaving custody. Before he was appointed Allan’s background had been challenging. He had experienced every part of the criminal justice system including custody several times and had issues with drugs and alcohol. His role as a life coach was in his words ‘his first real job.’  He was in his mid-40s at the time.”

As Laurie and Fiona explain, “Allan grasped the opportunity enthusiastically. He uses his experience and the impact of his own offending behaviour on his family with his customers. His commitment and passion for working with people in and out of custody is demonstrated by the fantastic results he has achieved by getting other people to transform their lives. Allan ensures his customers understand that not only is change possible, but everyone can change their lives regardless of their personal challenges. He has become an inspirational role model to his customers and to colleagues, particularly those new to this type of work.”

The scheme’s success led to expansion, so that in addition to working with young male prisoners throughout Scotland, a women’s mentoring service was introduced. “Allan completed a formal qualification in mentoring and was appointed as a mentor on the women’s mentoring service. This was a new challenge for him and involved the different sensitivities of working with women with multiple and complex needs. True to form, Allan embraced this opportunity and has demonstrated his outstanding capabilities, enthusiasm and empathy for the new role.”

Another initiative Allan has been involved in ‘No Knives, Better Lives’, in which he’s played an important role, again embracing it “with great enthusiasm” and making “a huge impact getting his important message across to young people.” Allan is also integral to an annual event with the Scottish Youth Parliament.

In his work with secondary schools, Allan talks to children “about his experiences and the impact of his previous behaviour on families and communities. He talks about the damaging effect a criminal record can have on future opportunities for the individuals, their families and friends.” As Laurie and Fiona report, “The head teacher of one of the schools said ‘the children were gobsmacked at the presentation from Allan McGinley. They were mesmerised by the candour and reality of Allan’s talk about knife crime. Our campus police officer said it would be fantastic if Allan could visit schools regularly to reach more children this important and effective message’.”

For almost a decade, “Allan has achieved something that he could never imagined. He is working in a role that he loves and can provide for his family in a way that he could not have done before. He is a trained and professional mentor and a member of staff with an impeccable record. Every day he demonstrates his commitment, passion and flexibility by working with customers and supporting them to change their attitudes and behaviours. He works with them to sort out the practicalities of leaving prison like accessing housing, employment, education and tacking addictions.”

Laurie and Fiona also note a very common feature among Butler Trust winners: “as an individual, Allan has a very unassuming nature. He is modest and undervalues the outstanding contribution he makes in reducing re-offending”, and they add that “Allan regularly says how grateful he is for the opportunity to be able to do this job.”  They conclude by noting that they are “extremely proud that Allan has transformed his own life and his family as well as the hundreds of customers he has had a positive influence on.”

Butler Trust Local Champion, South Lanarkshire Council’s Justice Manager Malcolm McAulay, comments that: “As an individual, Allan has been on a wonderful journey of self recovery and personal development and is continually learning,” and says “there is significant evidence that he has assisted individuals change their offending behaviour, that has led to a better lifestyle for them. He also realises the importance of preventative work and has undertaken this with an enthusiasm that engages others and allows Allan to give a very positive message to others.”

Malcolm adds that “Allan is a champion in this area of work, although he does not readily recognise this. He probably views himself as doing a role that he likes, possibly helping others not to make the mistakes that he made… Allan probably views social workers, wardens, [and] other professionals… as being more important than himself. Allan is a very important cog in the wheel of change for offenders and I feel very strongly that it is essential to recognise the very important work and commitment that the Allans of the justice world provide in helping offenders reduce offending, stop offending, change their lifestyles, and so on.”

Malcolm also comments on Allan’s modesty, saying “He goes about his job not seeking praise or anything else. He is an individual with a great work ethic and a wonderful self motivation to assist others to achieve changes in their behaviour or learn the preventative message and not offend. No matter an individual’s background, Allan is willing to engage with them. Similarly, he has a thirst to learn and take on new challenges, as long as it influences his learning and work with offenders.”

Malcolm talks of Allan’s “remarkable journey of recovery” and notes Allan’s “wealth of knowledge and experience to motivate individuals, even when they feel like relapsing or meet other difficulties.”

In Allan’s own words, “For the first time in over 20 years I was in paid employment by an organisation who clearly believed that I could use the negative experiences from my life for a positive purpose: to help and encourage others to realise that life ‘didn’t have to be this way’ and to aspire towards the change that lies in all of us.”

As he explains, “After a lifetime of involvement with the criminal justice system, I have been given the opportunity to support individuals to find their own pathways out of this repetitive cycle of offending and prison and can honestly say that since this incredible journey began, I have never looked back. During the early part of my life it is estimated that the cost to the public of my criminality was in excess of £1m. For almost ten years now I have not only been in paid employment and proud to be a taxpayer, but have helped over 500 customers to make positive changes to their lives.”

Allan says he takes “immense pride in my work” and never loses sight of the fact that “my efforts can make a huge contribution to other people gaining the courage and motivation to do exactly what I have managed to do… change for the better.”

Allan recognises that “the diversity of the role is an immense challenge where one day I could be supporting an individual who has only recently arrived in prison and is having difficulty in adjusting; another could be waiting at the prison gates to pick up someone who is being released and is homeless and for whom I need to access accommodation!” and describes other challenges ranging from “accessing drug and alcohol support and rehabilitation services, accessing and engaging with benefit agencies, rebuilding relationships with families and communities, registering with health services (physical and mental), liaison and advocacy with statutory services such as social work, support to complete Community Payback Orders and on occasions providing support to attend court proceedings.”

While “fully appreciating” that his work “is not in isolation a ‘silver bullet’ to solve the problems my customers have to face,” Allan believes that by “using an intensive, asset-based mentoring approach which puts my customers self identified needs at the heart of the working relationship, there are clear indications that, as they grow in confidence and make small successful steps forward, their desire to repeat these successes continues to grow. It is clear from the many honest conversations I have had over the years with my customers that few, if any, have ever had any positive role models in their lives and I am proud to step into that role for them.”

On a personal note, he says that “one of the major benefits to the work I do is that I have developed both personally and professionally and have realised more potential than I ever imagined.  From having been an embarrassment to my family and blight on my community I now have a superb family relationship and am considered to be an asset within my local community.”

Referring to his work giving interactive talks at schools, he concludes by saying “I firmly believe that this type of educational opportunity should be expanded to as many children as possible and would really like to see this area of my work being developed in a major way. There is great deal of discussion and dialogue around reducing re-offending, however, if we can expand this type of work with children at the right age and stage, we can surely reduce offending well before it becomes the problem of re-offending.”