AWARD WINNER 2020-21: Alice Jones is an outstanding example of a great teacher imaginatively supporting prisoners with Additional Learning Needs (ALN)[1] at HMP Parc in Wales. Her unique combination of skills and gifts has achieved remarkable results – as testified to by numerous nominations, including several prisoners. In addition, her own personal support for colleagues working across the establishment is widely recognised and deeply appreciated.
[This Award is supported by The Bromley Trust.] 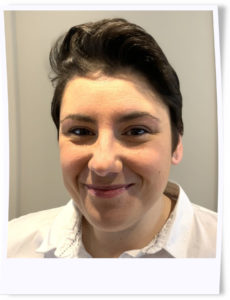 The issue of prisoners with learning difficulties and disabilities is a significant but generally underpublicised one. As many as one in three prisoners have learning difficulties, and this group is far more likely to experience segregation as well as control and restraint. They are also more vulnerable to depression, anxiety, suicide, abuse, and hate crimes. (The Butler Trust’s practitioner event on this topic covered many of these issues). Communication problems are often crucial, and expert learning support can make a real and enduring difference – as Alice’s work shows.

HMP Parc’s Community Engagement Manager Phil Forder (a Butler Trust Commendee in 2015-16) says Alice “embodies empathy”, noting that he received many nominations and “every one of them was outstanding in its own right. She works insightfully with some of the most challenging individuals in the prison, and champions giving a voice to those that struggle to be heard or understood.” He adds that she has “extraordinary patience” and “will go to great lengths to find out what a prisoner has an interest in and build up an individual learning plan that allows him ownership and pride – things that are often non-existent and underlie many problems in his life.”

Phil’s first example is a vivid one: Dan’s Book of Cats. Dan*, a prolific self-harmer, loves cats “so Alice helped him make a book about them and had it printed”, recalls Phil. “The pride Dan expressed when he showed it to me was obvious and, astonishingly, he hasn’t self-harmed once since it was printed. Dan’s handwritten nomination simply said:

A second example is Richard*, a prisoner whose short-term memory is “immensely impaired, causing him to have no confidence”, and who suffers with depression as well as very low literacy skills. His passion in life is music and despite his problems, says Phil, “Alice arranged for him to have his own music show on the prison radio and helped him remember things by visually re-designing the entire radio station manual and filling it with visual prompts. This led to organising visual aids that allowed Richard to even complete interviews on air. Through the medium of radio, she was able to teach him literacy and numeracy.”

When restructuring meant that it looked like Richard would lose this role – due to his not having required levels of education – “Alice fought his corner and even helped him become the first ‘red banded’ prisoner with additional learning needs in HMP Parc”, say Phil. Richard’s written nomination is very moving:

Mark is another prisoner with learning difficulties who also made a nomination:

“She is a good teacher and has helped me paint my cell after it caught fire. She made me signs so that I know what time of the day it is cos if I sleep at lunch, I think it’s morning when I wake up.”

Meanwhile Jake*, a man with the reputation, says Phil, as Parc’s “most violent” prisoner, also made a touching nomination, given here in full:

“I am making this nomination to Alice as she has relly helped me since I have been at Parc. I arrived hear from Oakwood and went straight to the Phenix Unit (seg) threw smashing up cells, flooding and being non-compliant (I was previously kicked out of six other jails before coming hear). I had a one track mind untill I meet Alice and she came to talk to me and offer me a pertential move to C-wing which I later on agreed to. When I got there she gave me 1 to 1 hellp and pushed me down the education route. I have been enhanced now for 8 months completed my level 2 in maths, L1 in English and Allso completed the railway course. Alice was very determined to try and help me in the best way she could, very patient and because of that she has helped me more than she can imagian, and I would just like to say thank you.”

Alice is clearly also highly appreciated by her colleagues. Her initial nominator, Prison Custody Officer Olivia Monro, tells a story about Alice, who she didn’t then know, spontaneously offering her a vital “five minutes” of support at just the right moment – Olive had just handled a very difficult situation with a prisoner.

Olivia wrote how a warm personal and professional relationship has since developed, and added, in an affecting piece of nomination writing: “I often wonder where I’d be today if I had not come across her in that corridor. All it took was five minutes of her time to help me process what had happened, so I’m now taking five minutes of my time to show my appreciation for Alice.  Alice, thank you for being the stranger in the corridor that I didn’t know I needed. Your continued support has helped me grow both as a person and as a PCO6. Thanking you will never come close to showing you how truly grateful I am for your five minutes on that day and all other days since.”

Other colleagues added their praise, with Arianwen Selway, a Registered Nurse in Learning Difficulties, saying Alice “goes above and beyond” to ensure prisoners “are always at the centre of the services, ensuring their voices are heard regarding what they would like to learn and skills they need to develop.” Arianwen added that Alice “always has positive words of wisdom and always offers support and guidance, regardless of her workload. She is a key asset to HMP Parc’s success.”

Another colleague, Sally Thomas, is Parc’s Reader in Residence, and called Alice “a great team player who continuously works together with the officers on the wing to promote best practice and share information so that the men can prosper.” Sally notes that during COVID-19, when Alice volunteered to support her colleagues in this highly challenging period, “she has been there, on the wing, for her learners every day, helping to allay their fears by not missing an opportunity to support them.”

Sally added that Alice had “delivered food to cells, continued to hold individual sessions, organised calls to families, and generally helped, hands on, to maintain the routine of the wing which is so vital for those on the Autism spectrum, for example. She has even been seen on numerous occasions mopping floors and cleaning handles with her men. Her passion and drive have helped so many on their difficult journeys. She well deserves recognition.”

Parc’s Director, Janet Wallsgrove, calls Alice “an extraordinary person who, due to her own difficulties with dyslexia, is passionate about helping others who struggle with Learning Difficulties.” Janet adds that Alice’s input in this field “has been phenomenal, pioneering many insightful and creative pathways that culminated in the establishment of the Cynnwys[2] Unit, one of the first designated wings for prisoners with Learning Difficulties in the country.” She adds that:

“Alice is a remarkable person who allows many of the most misunderstood people’s voices to be heard, often for the first time, which… can often bring about a complete change in behaviour. She truly is an outstanding individual at the heart of Parc, who combines singular qualities of empathy, professionalism and creativity.”

As Alice herself explains: “Every learner I work with takes dedication, skill and most of all creativity in a correctional setting. An example of this is Richard. His learning disabilities meant he could not achieve the educational levels required for a role in the radio station. Through advocacy, some interesting teaching methods that embraced his visual learning, and 1:1 support, Richard is making his own radio shows, and will become our first ALN resident to become a red band role. He is passionate about advocating the needs of others in prison with learning difficulties and told me he was very proud that I had been selected for the next stage of the Butler Trust. He even attempted to read your letter to me.” Alice wears a number of other hats, too, including her roles as a Trade Union Representative for Parc’s Staff Association, a lead volunteer for its Care and Support Team, and as a trained point of contact for staff for Post Incident Care Training.

“Supporting my colleagues is very important to me,” she concludes. “My door is always open to support people. Whether that is a cup of tea and a chat, or sign-posting to more specialist support. Every day in a prison is like no other, and sometimes it is overwhelming.”

[1] ALN is term used as part of a Welsh Government initiative, backed by legislation, bringing together two hitherto separate streams of activities – Special Educational Needs (SEN) in schools and education for those with Learning Disabilities and Difficulties (LDD) in further education.

[2] A Welsh word rich with meaning, including ‘embrace’, ‘harbour’, and ‘accommodate’.