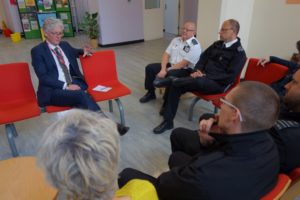 After 102 prisons, 17 months, and 17,210 miles, meeting 2,067 officers, prisoners and managers, the Trust’s Director Simon Shepherd has finished his Good Book of Prisons tour, finding out about the good things going on across the closed estate in England & Wales.

The aim of what’s been a very long journey was to show the world that whatever you might hear in the media, there are good things going on in every prison. While that’s not to say that there aren’t problems, and it’s clear the last few years have been especially challenging, constant negative coverage saps morale and impacts on performance and retention – and that’s something we hope The Good Book of Prisons will help to challenge.

And to make prisons safer and more humane environments in which to live and work, and improve their effectiveness as places of care and rehabilitation, we need not only to call out and cut out the bad, but also to identify and build on the good.

Simon travelled 17,210 miles in the last 17 months, holding meetings with officers, managers and prisoners in each – over 2000 people in total – and completed the tour yesterday on the tiny island of Portland in Dorset, famous for its stone and site of HMPs Portland and The Verne (interestingly The Verne was largely rebuilt in the Victorian era by prisoners from Portland, using stone they and their peers had quarried themselves).

You can find notes from each of Simon’s visits online at goodbookofprisons.com, and we’ll be publishing them, together with his wider observations and conclusions, once he’s had a chance to reflect on them (and had a bit of a rest!).

Speaking on his way back through the beautiful Dorset countryside, he admitted to being “exhausted!” and glad to have finished, but also said “It’s been really uplifting, and a privilege few people have. Most of all, though, it’s reinforced just how extraordinary prison officers are, and it really does feel that after all the challenges of late, things are beginning to change for the better again.”