The Butler Trust Publishes ‘The Good Book Of Prisons’ 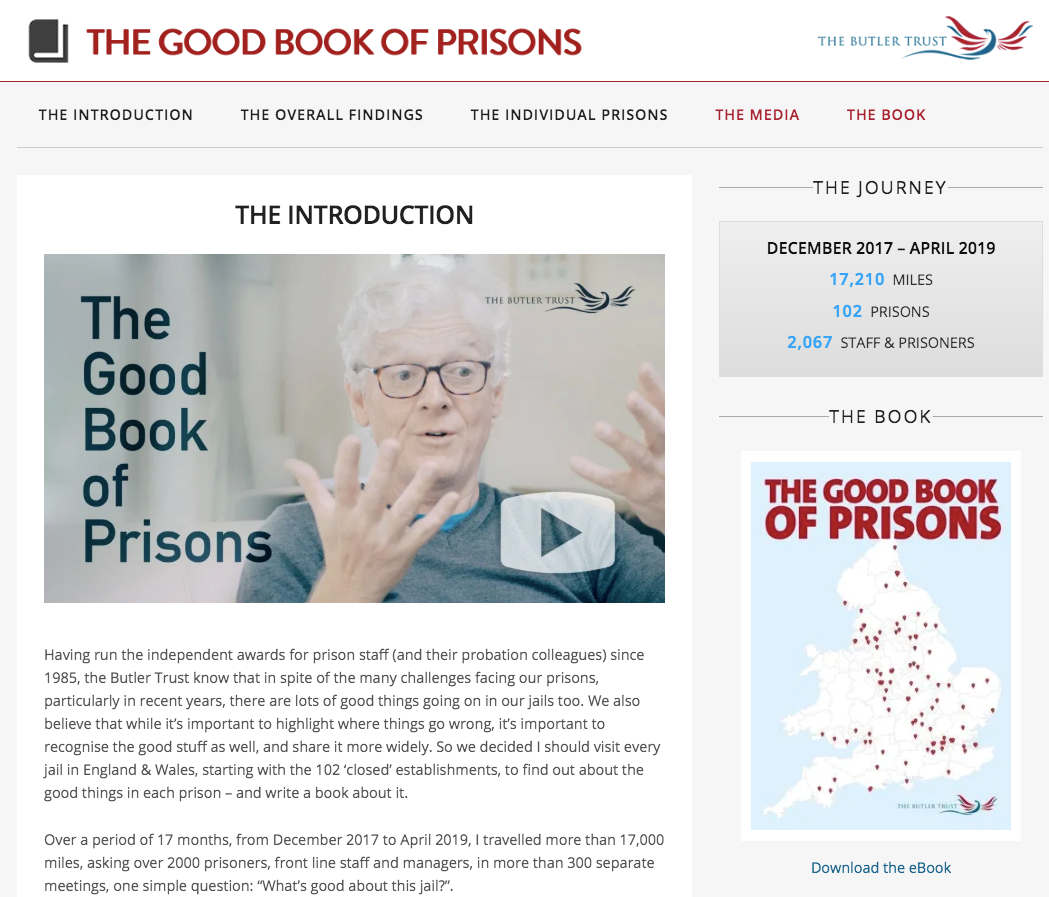 The Butler Trust Publishes ‘The Good Book Of Prisons’

The Butler Trust is pleased to announce the publication of the overall findings, and updated detailed reports on each jail, from Simon Shepherd’s tour of all 102 closed adult prisons in England & Wales, in a free downloadable e-book and online at The Good Book of Prisons. 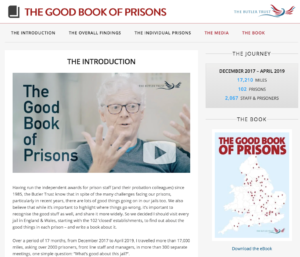 After thirty years in the criminal justice sector, including working as a prison psychologist and as Director of the Butler Trust since 2008, Simon explains that he was inspired to write the book because of his frustration at the media focus on negative stories:

“Over the years – and especially in the hundreds of nominations we get for the Butler Trust Awards each year – we’ve come across so many stories about outstanding work happening in our prisons. And behind all of those stories are the many thousands of people who work, on our behalf, in the prison system.”

“I was fairly sure that, among all the difficulties in recent years, there would be many good things happening across the estate – and probably in every prison. It took a while – about 18 months in between our other work – but having found so much good, and such impressive examples of outstanding practice, we felt we should make every effort to share the results as widely as possible.”

Among hundreds of examples and dozens of findings, the headline results include:

In the 242 years since John Howard’s pioneering The State of The Prisons in England and Wales was published in 1777, remarkably few people have set out to visit every prison in the estate – and, as far as we know, only Simon has done so with the idea of asking prisoners, staff, and managers, a simple question that goes against the prevailing negative narrative: “What’s the good stuff that’s happening in this prison?” 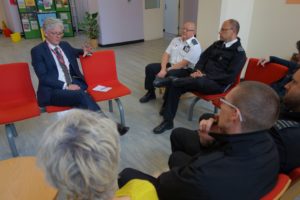 “It was fascinating and inspiring to hear about so many of the good things that go on in every prison all the time,” says Simon. “After the initial banter you’d expect, once they got started, every single group of prisoners, staff, and managers I spoke with had genuine positives they wanted to report.

Simon adds that he increasingly sensed “a sea change” as his visits progressed. The impact of new staff and the roll out of Keywork are proving to be real game changers, and so are the benefits – for staff and prisoners alike – of Kiosks and in-cell phones.”

Simon’s overall findings are broken down into 23 themes and highlight dozens of examples of ‘good practice worth sharing’. These in turn are supported by further detailed, and updated, reports on all of the groups he interviewed in each of the 102 prisons he visited.

“It’s difficult to think of a single area of prison life where I didn’t come across examples of not just good but superb practice. Again and again, prisoners and staff highlighted and praised work happening in education, training and rehabilitation.

“I also kept being told about ‘amazing’ Officers, gyms, healthcare – including mental health – as well as libraries and chaplains. The impact of peer support was also evident, too, in areas from self-harm to learning difficulties and palliative care. 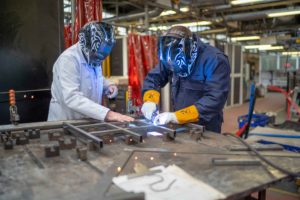 “Above all, however, I kept hearing about the quality and impact of Prison Officers on life inside. At the Butler Trust, we call them ‘hidden heroes’, because we think they are, but I hope this book reveals a bit more of that hidden side, and some of the good they get up to behind prison walls.

“Having done this tour, I can honestly say that in every prison, in among the well-known difficulties, there are less well-known but undoubtedly good things happening. Every day and in every prison. And the staff, especially, should be proud of that.”

Simon is also pleased to report significant national and regional media interest in these positive prison stories, ranging from BBC One’s The One Show and regional radio interviews to podcasts and press:

“We’ve found that, once they hear about it, the media is alive to these good practice stories. They understand that their audience are genuinely interested in the reality of prison life – and that includes the positive side, too.

“With intriguing details to draw people in, from duck ponds and the world’s first prison Park Run to joint prisoner and staff charity fundraising, the estate is absolutely full of stories worth getting out there.” 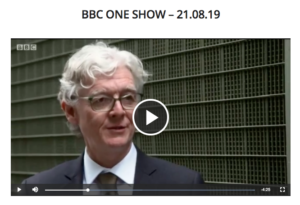 The findings from The Good Book of Prisons also cover perennial prison issues, including safety, management, communications, the environment, and food:

“Most of the knottier problems in the estate are well-known – but even there I found inspiring examples. Take food, for instance. It’s a regular issue, and budgets are incredibly tight. Even so, there were prisons who had ‘tweaked’ their catering arrangements so that many prisoners were openly enthusiastic on the subject. Whether it’s cooked breakfast, two hot meals a day, or the chance to learn to cook, at least a dozen prisons seem to be doing really well on that front – and it would be great to see other prisons learning from that success.”

Simon has said that it was “a real privilege” to visit all of the closed adult prisons in England & Wales (and he intends to ‘complete the set’ with visits to the open estate at a later date):

“My main observation, and I found this everywhere, is the extraordinary impact that Officers make to the life of a prison. We knew, from the number of prisoner-led nominations for the Butler Trust Awards alone, that there are outstanding people across the sector.

“But it’s another thing entirely to sit in jail after jail with hundreds of prisoners and hear from them personally about the impact staff have on their lives, their hopes, and their sense of progress towards a better way forward. That truly was incredible and, at its heart, ‘The Good Book of Prisons’ has become a kind of testament to the staff who do this work daily, on our behalf, in every single prison.”

The Good Book of Prisons is now available online and as a free e-book download. Hard copies will be distributed to prisons shortly.