The 2019-20 Butler Trust Annual Award Ceremony – our 35th – was due to be held at St. James’s Palace in London on Thursday, 26th March, presided over (as on every occasion since our launch) by our Royal Patron, HRH The Princess Royal.

Sadly, of course, we had to postpone our plans. Yet the primary task of the Trust and its Awards – to highlight outstanding efforts by those working in prisons, probation, and youth justice – feels even more important than ever under the current circumstances. We’re all aware of the heroic efforts of so many who continue to do what they do best on behalf of us all, but one group is rather more hidden than most – in the case of prison workers, literally behind closed doors – and we wanted to do something to mark the Awards, until we can hold them properly at a later date, not only for our deserving winners, but also to underline the vital contribution they, and all those in criminal justice system, make to the fabric of our national life.

So we decided to hold a ‘virtual Ceremony’ on Twitter (@butlertrust) and through our website – following, as closely as we could, the programme we would have followed if we’d been holding it for real… and, unlike the London Ceremony we planned, all were invited to attend.

We commenced, on schedule, at 2 p.m. sharp, with a welcome message from the Chair of our Trustees, Malcolm Butler. Malcolm is the grandson of RAB Butler, who as the Secretary of State from 1957 to 1962, understood the critically important role played by the men and women who work in our criminal justice system. As Malcolm stressed:

“Their role has never been more important, or challenging than it is right now, and they all deserve our profound admiration, appreciation and support for the gifts with which they do their work, and for being frontline staff. We are reminded by the absence of today’s scheduled event that offender management can never be absent in its role – it is on the frontline, where it always has been – and always will be.”

Our Royal Patron, HRH The Princess Royal, then shared some remarks about our winners and their colleagues in prisons, and probation and youth justice services, highlighting “the dedication, skill and resilience of the men and women who work in them” and noting the “critically important role [they play] on behalf of the people in their charge and the wider public”.

It was now time to introduce each of the 2019-20 Commendees who – when the event is rescheduled, in due course – will receive their Certificates from HRH The Princess Royal:

Next, we heard from two of last year’s Award Winners about their work – and what a Butler Trust Award had meant to them.

First, Sue Pearson from Leeds Youth Justice Service spoke about her work with troubled families addressing the often-hidden issue of child-to-parent violence, and talked of the impact of her Award:

“It was the most amazing experience to be invited to the Palace. I recall feeling so anxious, proud and excited as I waited with my son for the Ceremony to begin. It was an unforgettable experience to see his pride when I received my award.” (Find her full address here).

We then heard from David Savage, Deputy Governor at HMP Maghaberry in Northern Ireland – last year’s Princess Royal’s Prize Winner – who outlined his role in helping to transform the jail from “a place where Charles Dickens would not have batted an eyelid if he had walked through it”, and concluded with a message for this year’s winners and their wider colleagues:

“You are outstanding individuals working in an exceptionally difficult field. You should be extremely proud of your achievements as I know your families, friends and colleagues are. You positively change people’s lives each and every day, and I hope you continue to do this.” (His speech can be found here).

We then announced this year’s Award Winners:

After the Awards, we turned to one final announcement, the name of this year’s overall winner, and recipient of the 2020 Princess Royal’s Prize for Outstanding Achievement…

It would now, ordinarily, be time for afternoon tea, and a chance for Her Royal Highness and our many distinguished guests to speak to our winners in slightly more relaxed circumstances.

While they still look good, cakes and sandwiches aren’t as tasty online, but the words our supporters wanted to personally share with our winners, and their colleagues across the country, were as heartfelt as ever – and we were enormously grateful to get personal contributions and congratulations to our winners and their colleagues from a number of leading figures.

The Archbishop of Canterbury (whose mother, Lady Williams of Elvel, was RAB Butler’s niece), and Sir Trevor Brooking, both sent video messages:

As well as congratulating our winners and thanking their colleagues across the sector for their ongoing service, The Archbishop, one of our Patrons, noted:

Sir Trevor, a founding Trustee and now also a Patron, noted the spirit abroad in these trying times, and added that “all I can say from West Ham’s point of view is they’ve remained unbeaten for some time now!”

Two more longstanding supporters and Patrons of the Trust, the former Lord Chief Justice of England and Wales, The Rt. Hon. Lord Woolf, and Terry Waite CBE, shared their own personal messages:

There were messages too from: the Lord Chancellor and Secretary of State for Justice, The Rt Hon Robert Buckland QC MP; the Prisons and Probation Minister, Lucy Frazer QC MP; and the Chief Executive of Her Majesty’s Prison and Probation Service, Dr Jo Farrar. 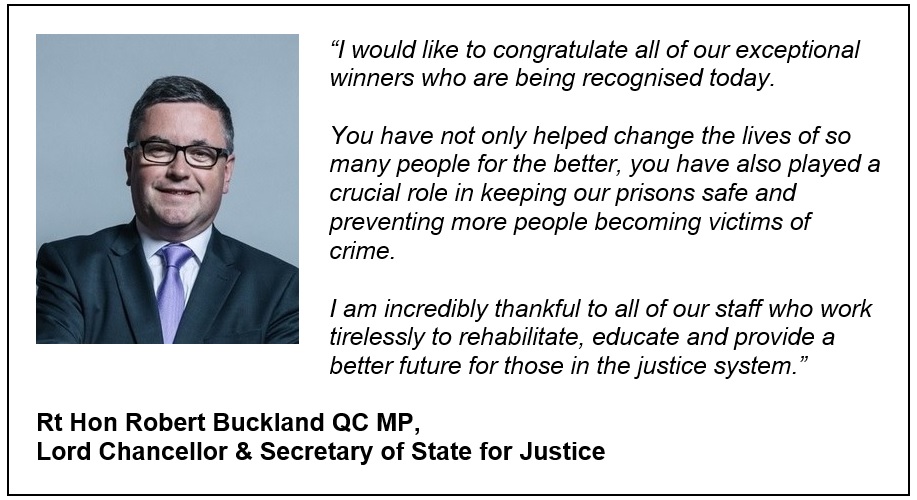 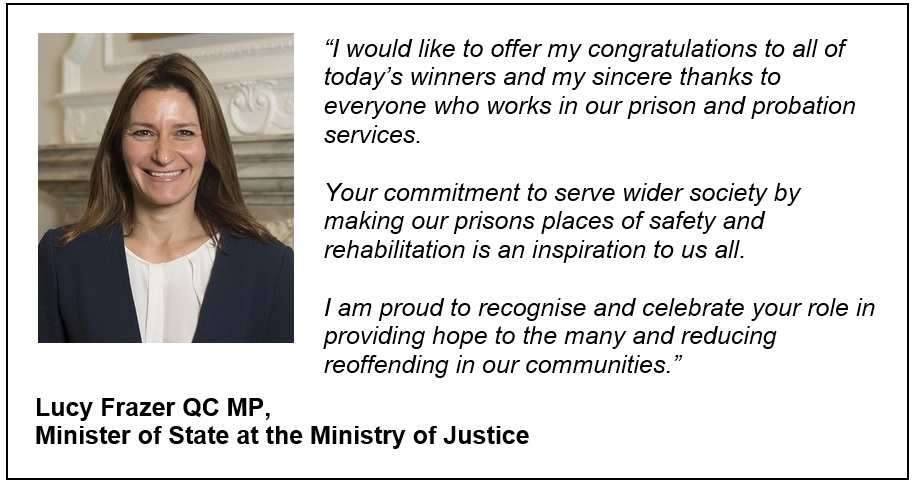 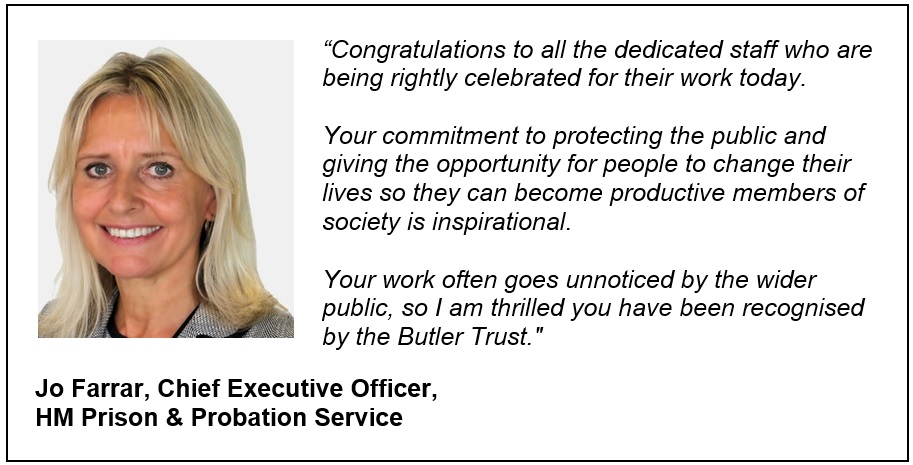 And many messages of support poured in during and after the event, by email and on social media.

And if we may, we’d like to add a final message of our own:

To all those working in prisons, probation and youth justice services right now, continuing to do what you do best on all our behalves – we applaud you! #HiddenHeroes