AWARD WINNERS 2014-15: Manager, Paul, nurse, Kath, and Officers, David and John, receive an Award for their outstanding work in the support and care of older prisoners at HMP & YOI Parc. A recent inspection report noted, “It says much about the ethos of the prison that during the inspection one prisoner asked to return from hospital to die among people he knew, and who cared not just for but about him”. [This Award is supported by The Manchester College.] 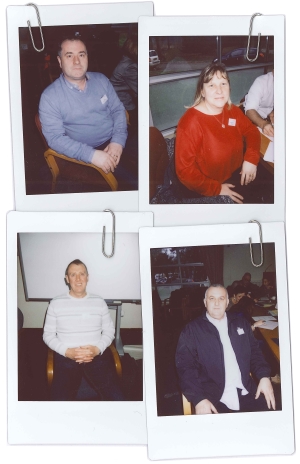 Kath Davies, Paul Goodridge, David Griffiths and John Watts work at HMP & YOI Parc where they have created and built an outstanding Assisted Living Unit for elderly prisoners – one of whom nominated them – and which has impressed Her Majesty’s Chief Inspector of Prisons, Nick Hardwick among others.

The affecting nomination is itself worth quoting at length:

“I am 76 years old and never been to prison before. The Assisted Living Unit (ALU) is where I am and it not what you would expect a prison to be like it is more like a care home. The officers here are fantastic and look after us very well. All the men on the wing are elderly many with chronic conditions and complex needs. The officers will do anything they can to help and assist. You cannot fault them. They are there when you need them in all sorts of ways…the boss Paul Goodridge will go out of his way to do things with us. The staff were probably not prepared to do work with elderly people but they are professional to a fault. I know many of them have done extra training to understand our needs. They have bent over backwards to help me and all the men in this Unit.”

As Phil Forder, Arts and Community Lead at HMP Parc explains, “There is a growing need for care and support of older prisoners due to longer sentencing and historical offences.” Paul Goodridge responded to this by instigating, managing and developing the ALU, ably supported by Lead Nurse Kath Davies and PCO6s David Griffiths and John Watts as part of a small but highly dedicated team.

The ALU addresses complex clinical and social needs, including dementia, end of life and palliative care. Paul has been instrumental in creating an environment that is “proactive and socially inclusive.” Paul and his team have undertaken a wide range of training, delivered in partnership with Macmillan Cancer Services, the Alzheimer’s Society, Stirling University’s Dementia Services Development Unit, AgeCymru and the Offender Health Research Network – the first time such training has been delivered in a prison.

The University’s report commended Paul Goodridge and his group’s excellent final exercises evidencing “high levels of commitment to the wellbeing of people with dementia.”

Maintaining the complex array of communications and relationships with clinical and social support service providers, both inside the prison and beyond, is a largely unsung element in such work which nevertheless adds vital benefits and ‘glue’ for complex needs provision. As Paul says, “Building, strengthening and continually maintaining these links with key specialist care services cannot be underestimated.” He also notes how the ALU approach “challenges perceptions within a changing prison culture.”

ALU has innovated in many areas, including developing a “buddy system”, with trained volunteers helping to support other prisoners both practically and socially.

Phil Forder visits the unit regularly, and notes there is an “immediately obvious… atmosphere of the wing which is calm and respectful.” He reports very positive responses from prisoners on the unit, too.

One prisoner, with moderate to severe dementia, said “The staff in here are fantastic, they encouraged me to start drawing. It is now my favourite thing to do.” Another adds, “The staff have helped me so much in here. I have Corticobasal Degeneration [a particularly aggressive strain of Parkinson’s]. As soon as it was diagnosed Paul got a specialist nurse in to see me. They are very helpful. If they say they are going to do it, you know they will.”

An 83 year old prisoner says, “I have been treated with kindness and respect. There are days when I do not feel very well [and am] in a lot of pain. The staff know what to do, and do all they can to help me.” Another simply calls the unit his “family.”

Paul is dedicated to an inclusive and multidisciplinary approach. ALU has also pioneered Supported Living Plans, an approach now in use across the prison estate.

One area staff have had to work with is end-of-life care. It’s a tribute to the quality of the group’s work that there have been cases where prisoners are due to be discharged to hospital, but have instead asked to remain on the ALU with staff they are familiar and comfortable with.

In the HMCIP report of July 2013, HM Chief Inspector of Prisons Nick Hardwick was impressed by the way both operational and clinical staff provided “compassionate and effective end-of-life care.”

Paul is described as “the architect” of the ALU, who has created “a very positive relationship for palliative consultants and Macmillan to play an active role in planning patient care” as well as being “inspirational to the rest of the team; improving morale and encouraging a reflective approach to care, to challenge what can be a prejudice, [for an] at-risk and potentially very disadvantaged cohort of individuals.”

Phil Forder calls Kath “a passionate motivator who very quickly bought into the ideas of an ALU…Her compassion and enthusiasm are boundless and contagious – she is inspirational.” Kath is keen, in her own words, to create “a symbiotic approach to social and clinical care”, to connect staff to individuals’ care and keep their “voice at the heart of all matters.”

David and John are both praised for consistently demonstrating “an enthusiastic, empathetic and inclusive approach” and for their “elevated appetite to learn and take on new challenges whilst imparting newly acquired knowledge to immediate colleagues and other departments.” David says, “I am proud of the work that we do and the people we support. Everyone deserves a dignified death.” John has a particular interest in prisoners’ life stories and “finding the person within the dementia.”

As well as being “incredibly professional”, G4S Director Janet Wallsgrove explains that the unit’s “ground-breaking approach” has been identified in an HMIP report as best practice and [which] should be adopted in other prisons in Wales and England.”

All of which is impressive. But this, also from the report, is perhaps the most moving testament of all to the ALU, and the people who have made it happen: “It says much about the ethos of the prison that during the inspection one prisoner asked to return to the prison from hospital to die among people he knew and who cared not just for but about him.”